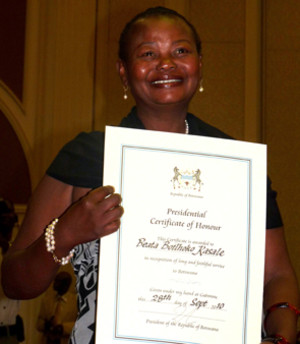 Saturday March 8th is International Womens Day. And we can pause to celebrate the women who’ve broken through the glass ceiling at the New York Times, where 50 percent of that newspaper’s top ten editors are now women. But internationally, women are still critically under-represented in media boardrooms and newsroom management and they remain poorly represented by the media.

Beata Kasale is one woman who has smashed through the glass ceiling. She is the publisher and former editor of The Voice, one of seven Botswana media organisations which recently united to devise and introduce a common gender policy designed to mainstream newsroom equality.

WAN-IFRA: As the publisher of The Voice, what’s your view on the status of women in newsrooms – including your own?

BK: Women are missing in key positions of leadership in the newsrooms. Although there are a few women working as journalists, most are in clerical, cleaning, distribution and advertising departments.

There is still a challenge to encourage more women to write politics, sports and investigative beats rather than lifestyle and entertainment. Women must make themselves visible. The media is about visibility. If they take a back seat, nobody will know that they are there. They should be more assertive. At The Voice women occupy the top positions – Publisher, Editor, Advertising and Marketing Director, Operations Manager, Advertising Manager and Sub Editor are all women. In the newsroom the photographer is a woman.

WAN-IFRA: Why is it important for women to progress through the ranks of newsrooms to occupy senior editorial and management positions within news publishing organisations?

BK: If women are given leadership positions, they will ensure that there is an equal voice for women and men in all areas of coverage, including increasing the number of programmes and features for, by and about women on gender-specific topics that challenge gender stereotypes.

This will encourage other women to realize that they have a role to play in the development of their companies and countries – not as second hand citizens who serve men tea in the boardrooms.

WAN-IFRA: What are the key obstacles to such progression in your experience?

BK: Women are their worst enemies. Once in power they forget about gender mainstreaming. On the other hand women employees are still to balance career and motherhood.

Why should it always be the woman who takes the baby to hospital? Where are the fathers?

From my own experience I have found female journalists reluctant to diversify their reportage by confining themselves to softer beats rather cover other beats such as politics, investigative journalism and sports.

These are the obstacles that hinder the growth of women in the workplace.

WAN-IFRA: How can these barriers best be overcome?

BK: As much as women are biologically different to men and have the challenge of maternity leave, it is imperative for women to come up with strategies…to still compete with men in the media.

Women should take demanding assignments even if it means travel and not give excuses of taking care of the home and still expect to progress to positions of leadership.

WAN-IFRA: Specifically, what can male managers do to confront these obstacles?

BK: Male managers should ensure there are policies in place which accommodate the needs for women to take care of children, as in most cases the male managers leave these duties to their wives too.

The Botswana Media Gender Policy also specifies the need for media houses to provide paternity leave so that men can also play a part in taking care of children to give women room to progress in the workplace.

WAN-IFRA: What’s your number one piece of advice to younger women starting out in newsrooms?

BK: Create a career roadmap for yourself.  Adopt a positive attitude, plan your goals and aspirations. And be assertive, assertive and assertive.

Don’t give excuses when you are asked to cover hard beats or investigative articles. Plan your career to accommodate the “nine months” you (might) need…but this should not be a hindrance to your career.