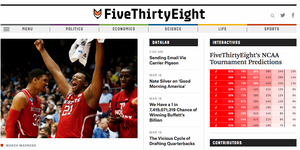 The project is being overseen by Nate Silver, the “data maverick” formerly of The New York Times and one of Time’s 100 Most Influential People in 2009.

Silver had impressive credentials prior to the original launch of FiveThirtyEight in March 2008, however it was his success in predicting the outcome of the November 2008 United States presidential election—he accurately predicted the winner in 49 of 50 states—that thrust him into the national spotlight.

In 2010, The New York Times formed a partnership with Silver to host the blog for three years. But their parting in 2013 was somewhat fraught.

In its first week under the ESPN umbrella, the revived FiveThirtyEight boasts content such as the sustainability of the American minimum wage, how statistics could help locate Malaysia Airlines Flight 370, and the selection American football quarterbacks.

Compared to its previous incarnation, the new FiveThirtyEight has more in-depth and diverse content. “The breadth of our coverage will be much clearer at this new version of FiveThirtyEight…” Silver says in an essay on the website. FiveThirtyEight will now cover five major areas: politics, life, science, economics, and sports. The new website has also increased its staff, going from two to 20 full time journalists.

“Our team also has a broad set of skills and experience in methods that fall under the rubric of data journalism. These include statistical analysis, but also data visualization, computer programming and data-literate reporting,” Silver continues in the essay. “So in addition to written stories, we’ll have interactive graphics and features.”

Silver also mentions that there are plans to launch a podcast in the coming months, and the possibility of collaborating with ESPN properties, ESPN Films and Grantland to produce documentaries.

Despite Silver’s reputation as a journalist and the project’s backing by ESPN, the website has re-launched to pessimistic reviews.

Prominent American economist Tyler Cowen writes that much of the content on FiveThirtyEight is too complex for the average audience, yet too mundane for the well-informed reader. Cowen also points out that some of the stories on the website have already been covered by other news outlets.

The Guardian’s James Bell also expresses skepticism. He writes that FiveThirtyEight’s journalists have had weeks to prepare content for the relaunch, and that maintaining strong content after the initial launch period will prove a challenge.

Silver has said that the website will rarely be the source of breaking news, instead, the approach will be pursuit of quality journalism supported with statistics. The chief concern is whether or not FiveThirtyEight’s new approach can build an audience that sustains the website.

In addition to sustaining an audience, FiveThirtyEight faces competition from other similar news websites. The New York Times and The Guardian each have their own data blogs. Also, former Washington Post columnist Ezra Klein is in the process of starting his own standalone data journalism project, Vox.