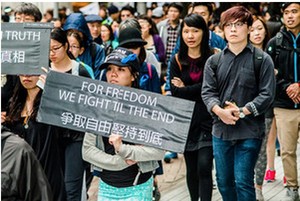 The survey, based on data received from a record-breaking 162 journalists in 2013, found that 18 percent of respondents had experienced difficulties with Chinese authorities. That’s twice the number of journalists reporting problems in the last survey, conducted in 2011.

And nine percent of the journalists who participated in the most recent survey said that they had been threatened with the non-renewal of their accreditation or visa because of their reporting.

One respondent reported: “During the year the public security police warned me that my reporting might jeopardize my visa renewal,” while another observed “There is evidence this was retaliation (for) reporting done by my publication.”

The FCCC concluded “…this year it became more obvious than ever that the Chinese authorities abuse the press card and visa renewal process in a political manner, treating journalistic accreditation as a privilege rather than a professional right, and punishing reporters and media organisations for the content of their previous coverage if it has displeased the government.”

Paul Mooney, renowned for his reporting on Chinese human rights issues was prevented from taking up a Reuters post in Being after being denied a visa last November. The Chinese authorities refused to disclose their reasons for rejecting his visa application. Meantime, New York Times Beijing bureau chief Philip Pan has been waiting more than 22 months for a journalist’s visa.

Delays in visa processing appear designed to intimidate foreign bureaux critical of China, according to the FCCC. “Chinese authorities withheld new press cards and visas until the very last moment from all foreign employees of the New York Times and Bloomberg, which had published articles about the private finances of relatives of leading members of the government.”

The effect of visa processing delays extends to impacts on China correspondents. “Without my passport I was unable to travel to any stories outside China,” one correspondent told the FCCC. While another said “I could not report on the turmoil and protest in Bangkok.”

The FCCC report comes as pressure grows on China over the erosion of press freedoms and crackdowns on journalists. Thousands of people took to the streets of Hong Kong in February to protest growing censorship and a lack of editorial autonomy.

And WAN-IFRA has joined international calls for better protection for journalists in Hong Kong after a series of attacks against the free press culminated in a brutal attack on ousted Ming Pao editor-in-chief, Kevin Lao.

Following the release of its survey of foreign correspondents, the FCC is calling on China to make a commitment to press freedom. “As China’s growing role in the world attracts increasing international journalistic attention, (we) urge the Chinese authorities to abide by international standards and accredit foreign journalists on the basis of professional criteria, without reference to the content of their reporting.”