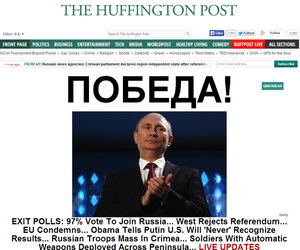 “Right now, with everything that’s going on, it’s probably not appropriate for us to continue and go ahead and launch a business in the midst of all this,” Maymann continued.

The impending launch of the Russian site was part of a wider worldwide expansion. Starting in 2011 with Canadian and U.K editions, Russia was set to be the latest after a Brasilian version launched in January. “We had a plan of 15 markets and we’ve launched in 11 so far. India is a place where we’re in negotiations and trying to do a deal.” Maymann told The Drum.

The Huffington Post also has aspirations for Mexico and China. Reuters reports Maymann as stating that the moves abroad are designed to both cut costs but also increase traffic. The same report quotes experts reckoning that by the end of 2014 half of the traffic will come from outside of the U.S.

The Huffington Post is not the only European outlet to have had second thoughts about its engagement with Russia. Earlier in the week the Süddeutsche Zeitung publisher’s chose to not publish this month’s advertising supplement Russia Today, funded by the Russian Government.