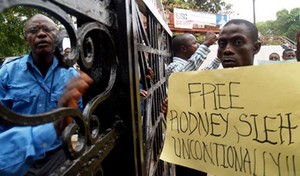 “This is about Rodney”, Malcolm Joseph, Executive Director of the Centre for Media Studies and Peace Building (CEMESP) in Liberia said, gesturing to the car radio as we navigated the frenetic traffic in Monrovia. “Turn it up!” I said.

It was as if the radio DJ knew we had just been to the headquarters of Front Page Africa. I had been spending time with its trailblazing publisher and editor, Rodney Sieh, and his printing press and generator. But those tools no longer hum to the rhythms of ink to paper – they were likely tampered with while Sieh was imprisoned last year.

Sieh, a champion of transparency, accountability and the exposure of corruption in Liberia through his daily newspaper, was imprisoned in a Monrovian jail last August. He was found guilty of libel for exposing a deal between Equatorial Guinea’s regime and members of the Liberian government which would see a $US130 million investment in Liberia’s airport. He faced a potential life sentence for failing to pay an exorbitant $US 1.5 million fine imposed for the conviction.

This incarceration occurred in a country with a relatively free press and a president who, in July 2012, committed to repealing criminal defamation and libel by signing the Declaration of Table Mountain. The move was designed to ensure Liberia’s press can flourish, free of economic or political control.

At the time of the signing, Liberia’s Nobel Laureate President Ellen Johnson-Sirleaf said, “We are signing the Declaration of Table Mountain in order to underscore our message loud and clear, to advance a free press and freedom of expression, not just in Liberia but the entire continent of Africa.”

Problem was, Sirleaf’s government did not repeal the legislation.

And so, nearly two years on, I found myself back in Liberia, accompanied by local media organisation CEMESP and regional organisation Media Foundation of West Africa, at a large and vocal intergovernmental meeting between the Ministry of Information, Culture and Tourism, the Ministry of Justice and lawyers, academics, journalists and publishers.

The good news is that this meeting agreed to expedite to the parliament, draft legislation on repealing criminal defamation, something that should have been done two years ago.

The not so good news is that despite a flourishing media scene, newspapers struggle daily to make ends meet.  Front page of the daily Independent on Monday this week slammed the Government for owing newspapers around $US1 million in advertising debts.

“We need strong advertising investment to function”, said Stan Seakor, president of the Liberian Publishers Association. “There is no mechanism for official government advertising that ensures we receive our payments.  Newsprint is expensive and so are the materials to run our printing presses.  It’s a daily struggle”.

I think about the silent printing press at Rodney’s newspaper offices. Idle since his jailing in August last year.

“We work from home now.  There’s no electricity while the generator remains broken.  My office was firebombed in 2011 and I still receive threatening and anonymous texts.  It’s easier if we all work from home,” Rodney said.

He showed me his phone with text messages speaking in riddles from an anonymous stranger who refuses to pick up the phone when he calls.

It’s individuals like Rodney Sieh, who despite setbacks and threats, continue to practice journalism at great personal cost, to ensure emerging democracies like Liberia thrive in societies which value the independent press as an antidote to corruption.

Reflecting on the story that landed him in jail, Sieh epitomises this spirit: “They wanted me to apologise for the article, but I said no, so I live to fight another day.”