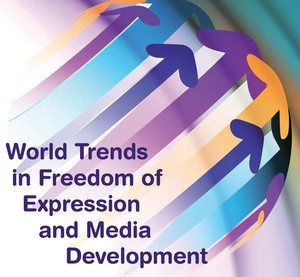 To be released in Stockholm on Tuesday, the report draws on the expertise of nearly thirty international contributors from civil society and academia.

UNESCO Director General Irena Bokova welcomed the imminent release of the report, saying: “Today, more and more people are able to produce, update and share information widely, within and across national borders. All of this is a blessing for creativity, exchange and dialogue.”

But, concurrently, she warned that new threats are arising “In a context of rapid change, these are combining with older forms of restriction to pose challenges to freedom of expression.”

The convergence of dramatic technological change, international financial crises, business model upheaval, and changing media production and consumption habits forms the backdrop to the emergence of these trends. Consequently, UNESCO has specifically highlighted the roles of bloggers and citizen journalists in the report.

Here is a WAN-IFRA curated list of the top ten trends identified in the UNESCO report:

1)   Advances in technology and innovative business models have opened new avenues for freedom of expression globally, including increased participation by women

2)   New challenges have emerged in the form of registration of Internet users and Internet censorship, filtering, blocking, and surveillance which are subject to international mimicking, while direct and self-censorship remain global trends

5)   Increasing use of civil defamation laws to target critics in lieu of criminal sanctions, along with the rising threat posed by ‘religious defamation’ and blasphemy laws

7)   Media pluralism has benefited from a vast expansion of information sources and platforms, including social media

9)   Women journalists, and their citizen reporting counterparts, are facing increased intimidation and abuse – on and offline – including sexual assault

So, how should the global media community respond to these trends?

“We need to act on the ground – to strengthen national legislative frameworks, to train journalists, to build capacity and advance media and information literacy,” UNESCO Director General Irena Bokova says.  And she acknowledges that supporting media independence through the promotion of professional standards and self-regulation is key.

UNESCO’s Director of Freedom of Expression and Media Development, Guy Berger, will address the newsroom implications of current debates about media freedom and privacy during the 21st World Editors Forum in Torino this June.