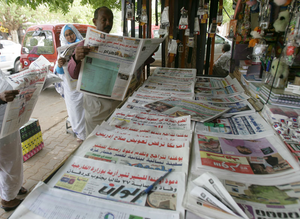 The very same day of the Constitutional Court’s decision, the National Intelligence and Security Services (NISS) seized issues of al-Hurra and Elaph, while Citizen, an English-language paper, was forbidden from printing. The next day it did the same for al-Sudani, Akhir-Lahza and al-Hurra. On 4 March 2014, NISS had seized Al Jareeda, Akhir Lahza and Al Sudani newspapers, which had been confiscated earlier on 1 March. On 3 March, copies of Al Sudani had been seized as well as that of Al Hurra and Al Ahram Al Youm. The intelligence services also suspended the independent Al-Jareeda newspaper indefinitely.

The Arab Network for Human Rights Information (ANHRI) denounced these confiscations, which they see as “an attempt to force those independent newspapers, which always refuse to be mouthpieces of the regime, to be shut in an indirect way.”

Reporters Without Borders has also strongly condemned the oppressive climate the Sudanese authorities are imposing on the media community, which ranked 172th out of the 180 countries listed in its 2014 Press Freedom Index. Cléa Kahn-Sriber, the head of Reporters Without Borders Africa Desk, explained that “This particular harmful strategy of seizing already printed newspapers amounts to a de facto suspension of publications without having to come up with legal motives and while condemning these papers to a slow financial agony.” But recent confiscations “are sadly only a drop in the ocean of arbitrary measures taken by the NISS against the media in Sudan.”

The media coordinator for the Sudanese Council for Defending Rights and Freedoms and former journalist at the now-suspended Ahjras Al-Hurriya and Al-Midan newspapers, Hussein Saad, told Al-Monitor that the Sudanese press is already going through a difficult time: “The margin for freedom of expression has become nearly non-existent, and the Sudanese press is already subjected to pre-publication censorship; newspapers are closed and confiscated. Closures and court cases against journalists have become common.”

The Sudanese Council has also warned about a new media law drafted without the input of journalists, publishers, or other stakeholders. It is seen as even more repressive than the 2009 press law, which already gave the state more control over the press and more power to suspend newspapers and control the registration of press companies.

These confiscations come as Sudanese President Omar al-Bashir reiterates calls for dialogue and reconciliation with political opposition forces. Despite President Bashir’s speech on 27 January which addressed public freedoms and asked all parties to lay down their arms and engage in dialogue, violations against press freedom have continued. ANHRI complained that “actual practices proved otherwise, as these statements were merely to improve the image of the ruling regime in front of the international community, while the suppression of press freedom is still continuing.”

Growing intolerance towards a free and balanced press has also deepened in neighbouring South Sudan, as South Sudanese Information Minister Michael Makuei recently warned reporters against interviewing the opposition, or else face possible arrest or expulsion from the country. The Committee to Protect Journalists (CPJ) East Africa representative, Tom Rhodes, comments that even though South Sudan remains relatively tolerant compared to its neighbour, “South Sudanese authorities’ growing intolerance toward a free press increasingly resembles the oppressive tactics of Khartoum–repression that led the South Sudanese to fight for their independence in the first place.”