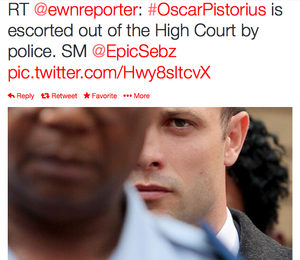 WAN-IFRA’s Salim Valji has been monitoring five journalists covering the Pistorius trial and has used Storify to compile his analysis.

* Bateman, Gerald Imray of The Associated Press and Geoffrey York of The Globe and Mail were the journalists who interacted with readers and responded to their questions.

While Twitter is an extremely powerful tool, covering a criminal trial with a 140 character limit presents its challenges. Clarity and accuracy must not be foresaken, however journalists must be able to simplify the proceedings for their audiences.

“Many journalists sit in court tweeting on laptops. We’re all trying to report and commentate on what’s happening in real time. We have to make a judgment about what’s relevant, gives an insight into the case or is just plain dramatic,” David Smith of The Guardian told WAN-IFRA. “For example, when the first witness described hearing “bloodcurdling screams”, many people tweeted that. I don’t bother tweeting some of the more technical details about legal procedure.”

At the end of February, South African Judge The Honourable Dunstam Mlambo agreed to allow the trial to be televised and broadcast live, despite strong opposition by Pistorius’ chief legal counsel Barry Roux.

The application was originally sent by two television stations, MultiChoice and eNCA, and the radio station Eyewitness news. As a result of the ruling, independent South African television broadcaster MultiChoice announced the creation of a television channel devoted entirely to the murder trial, including court coverage, feature stories, and in-depth analysis.
In his justification for the ruling, Judge Mlambo referred to the fact that both Pistorius and Reeva Steenkamp are both internationally recognized, and that the bail hearing was covered by hordes of domestic and international media. The judge also referenced the South African Constitution, and the rights to freedom of expression and freedom of the press.

Judge Mlambo placed certain restrictions on the scope of the coverage of the trial, which began on March 3. Broadcasting is not allowed while the court is adjourned, and flash photography, artificial lighting, and close-ups are also forbidden. Certain testimonies and trial elements will not be broadcast.