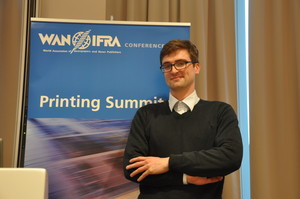 “Today’s newspapers do not correspond with the zeitgeist,” says Ittermann. The “news” are not new because they have been spread by electronic media already, and newspapers comment on them. They spread their opinion to the readers, but that is just a one-way street, since the readers’ opinion is not considered.

Ittermann asked himself: “What do I want from a newspaper?” The answer was interaction with the reader, and his/her participation.

Driven by that democratic conviction and the idea of creating a newspaper containing extra value, in September 2012 he and a partner launched the +3 Magazin, a magazine that in its format and haptics (a tabloid on newsprint) resembles a newspaper and is distributed as a free supplement with a German national paper (Sueddeutsche Zeitung).

The concept is as follows: Readers are invited to give their opinions on three questions that are printed in the magazine and published on the website (www.plus-drei.de). The spectrum of topics covers all areas of life: from climate change to healthy nutrition to sustainability of democracy. The questions are addressed in the next edition, where experts in those areas issue their statements.

The best reader contributions to the questions are published in the same or the next edition. “Only by including the digital channels it is possible to get input from readers,” says Ittermann, citing e-mail, SMS and Facebook as examples of those channels.

To maximise reader input, the publishers plan to make use of augmented reality before the end of the year. That technology, Ittermann says, has so far been used only as an output channel. “Augmented reality has not succeeded because the approach was wrong,” he says.

Also, so-called beacons, miniature transmitters that sense when a smartphone user passes by at a distance of 30 metres and sends out messages to him/her, should be tested, says Itterman.