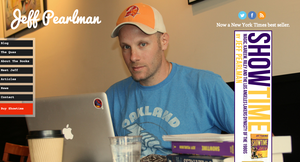 Expectations for the modern sports journalist have changed as digital media evolves. No longer are sports journalists expected to only write. “Back when I was hired by Sports Illustrated, I was a writer – period. No audio, no video, no blogging, no Twitter, no podcasts. That’s all changed,” Pearlman said.

“It’s not just about being a great reporter, or a great writer. It’s about being a utility knife,” Pearlman, a former Sports Illustrated writer and best selling author of six books about American sports dynasties, said in an email interview from New York.

According to Pearlman, the rise of social media has had huge implications for sports journalism. These platforms now play a critical role in the way games are reported and interview subjects are sourced. “It’s a huge help in tracking people down. Has made it so much easier to find people,” Pearlman noted.

Despite the clear advantages, Pearlman does concede that in some cases, social media has hampered the overall quality of sports reporting. “There’s such a pressure to rush information and be first and Tweet out what you know that, often, you get stuff wrong, and you don’t have time to develop quality sourcing, material. I hate this turn,” he said.

Another major way that sports journalism has changed is the way that sporting events and identities have converged with human interest stories. The backdrop to events – social, cultural, economic – and the private lives and experiences of sports identities have become increasingly important in coverage.

“There’s no question we need journalism in sports. We just need to get past the idea that it is only about the big games,” said Lou Ferrara, managing editor of the Associated Press, in a speech to the College Media Association earlier this month.

In an era where sports is often the backdrop to more universal topics, the days in which sports journalists are solely interpreters of the plays scoreboard and generators of post game clichés may be coming to an end.

The recent Olympic Winter Games in Sochi, Russia, proved how mundane sports events can appear when surrounded by greater causes. The impending Russian annexation of Crimea, LGBT rights, and overwhelming infrastructure costs were just some of the many issues brought to the forefront by this major international sporting event.

Journalists at the games created content that combined the athletics events with the surrounding environment. Stories such as a female Ukraine skier refusing to participate in her best event as a form of protest over Russia’s actions towards her country, Russia attempting to lure tourists to a new ski resort in a region better known for harbouring Islamic militants, and Olympic sponsors being affected by Russia’s anti-gay legislation all focused on human rights issues while using the Olympics to provide context. The stories used a diverse array of sources, including professors of business, tourism experts, and, of course, the athletes themselves.

The Olympics are not the only sporting event whose stories go far beyond the playing field. Racism in football has always been a major issue. The recent suicide of a Canadian junior hockey player has raised the question of whether young athletes are under too much pressure to succeed, along with an exploration of mental health problems experienced by players.

According to Ferrara, learning to cover news should be a major focus of sports media training. He cited Tiger Woods, and how the news of his infidelity was not broken by covering a golf tournament, but rather by poring over police records.

As both Ferrara and Pearlman stated, being flexible and universally marketable is the best approach for sports journalists to take, while embracing social media and finding stories beyond the playing field are paramount.

Sport: Staying Competitive will feature at the World Editors Forum in Turino, Italy from 9-11 June. A session featuring David Dinsmore, Editor of The Sun, Philip Chetwynd, Global Editor-in-Chief, AFP, France and Andrea Monti, Editor of Italy’s La Gazzetta dello Sport will look at how newspapers need to adapt to stay in the game.