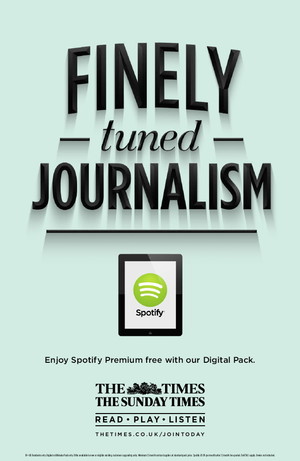 Since February, the Spotify Premium music streaming service has been offered with two “packs”: The Digital Pack, which costs £6 per week, and The Ultimate Pack, which costs £8 per week. The service is being offered to existing customers as well as newcomers.

The offer is having “a really positive impact on current subscribers” as well as attracting new ones. “So far, so good,” says Gribben, who declined to provide numbers.

As for the origins of the partnership, she says Spotify “just felt right” as a business partner, since “we know our subscribers are into music, are passionate about music, so there is a natural relationship there. With regard to the customer relationship, it’s deepening that relationship.”

Gribben says The Times and Spotify together are generating a great deal of exclusive content for Times subscribers. At launch, for instance, editors interviewed celebrities and columnists about their favorite music, and created playlists especially for various occasions, such as driving, working from home, or getting ready for a night on the town. That kind of content drives “that next level of engagement,” says Gribben. “It’s that reading and listening combined experience that is really new for us.”

Another feature in the works is a series of exclusive musical performances combined with interviews. Says Gribben, “It’s not just a gig and not just an interview. You get the best of both worlds. You get that insight into the track and you get to listen to the music too.” The first performance is to be made available within the next few weeks.

The performances are part of The Times events program, which has expanded continuously since its launch in September 2008. “This is another really exciting branch that we’re able to add to that repertoire,” says Gribben.