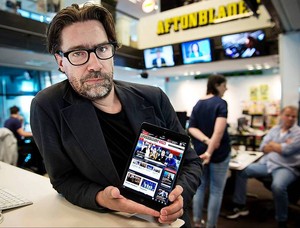 Magnus Zaar, Head of Aftonbladet TV, is also part of that commitment. Arriving two years ago, he brings an entrepreneur’s perspective to the business. With the founders of Skype, he helped launch online video venture Joost in the Nordic countries, and was managing director of Kamera, one of Europe’s leading online TV companies.

He also brings a broadcaster’s perspective – he proudly announces that he was the executive producer of the first “Survivor” series, in 1997, and has done stints at a variety of broadcasters and production houses.

But whichever hat he wears, his industry experience gives him a unique perspective on current and future trends in the integration of video into online news operations (which he will share at the World Newspaper Congress in Torino, Italy, in June).

For example, he states: “Pre-live is better than live.” What does he mean?

“Things are moving so fast now, people are so keen on knowing things, and the attention span is so short, that live isn’t enough,” he says. “You need to be ‘pre-live’: waiting in the parking lot before a verdict in a courtroom. Waiting for a person to hold a press conference can be more interesting than the press conference itself.”

Magnus cites the 2012 coverage of Felix Baumgartner’s free-fall altitude record from a balloon as an example of this phenomenon: there was much more viewing as the balloon was ascending, and there was almost nothing to see, than when Baumgartner made his historic leap.

“He hadn’t even left the balloon and people said, ‘OK, bye-bye,’” Zaar said. “As soon as you know what’s going to happen, the surprise is not there, people aren’t interested. It puts quite a lot of pressure when you’re doing TV.”

Zaar recruits staff from the broadcast industry, but also a lot of people right out of film and TV school. “We expect them to be both in front of the camera and behind the camera – journalists, producers, post-producers. If you’re 22 and you have all that, you are welcome.”

When he arrived at Aftonbladet two years ago, there were 19 people running one small studio. Now the TV division has 70 people and three studios, including that one in the central news desk – which can be up and broadcasting within minutes of any breaking news event – faster, in fact, than many traditional broadcasters.

By any measure, the operation is one of the world’s most complete integration of video and TV in a newspaper. Aftonbladet Online has 3.2 million unique users each day in a country of around 9 million people. There are 1 million started video streams each day, four hours of live TV every weekeday, and 10,000 clips posted every year.

The company uses video as an interactive medium: through its Tipsa! tip service, viewers can use a mobile app to film live and sent it straight to the control room. “We say to people, if you’re at a news event and you have the Aftonbladet app – I’m sure you do – pick it up and start filming.”

Aftonbladet is also be proactive in seeking user video, thanks to its geo location function. When a story breaks, they can push messages to everyone who has app and is nearby, asking them for video.

“You need the tools in place and you need the full toolbox,” Zaar says. “We are totally integrated into the editorial work.”

Zaar will be sharing his experiences at the World Newspaper Congress, from 9 to 11 June next, in a session titled, “Why Video Matters: Get in the Game.”

Others in the session include: Chris Cramer, Global Head of Video for The Wall Street Journal, Eric Scherer, Director of Future Media for France Televisions, Amy Mitchell, Director of Journalism Research at the Pew Research Center, Susan Vobejda, General Manager of Media Licensing and Distribution for Bloomberg, and Jérôme Grateau, Managing Director for Partner Business Solutions for Google in Southern and Eastern Europe, the Middle East and Africa.

More on the Congress, the annual summit meetings of the world’s press, can be found here.