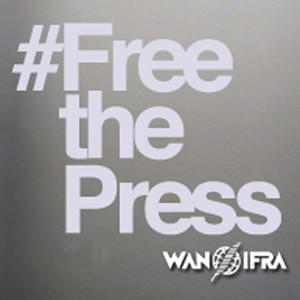 The situation has been deteriorating for many years, but seems to have particularly worsened in the run-up to and aftermath of Azerbaijan’s October 2013 presidential election.

At present, there are 10 journalists and five bloggers in detention or prison for political reasons in Azerbaijan. One of these bloggers is Rashad Ramazanov, a 32 year-old religious follower currently serving a staggering nine-year prison sentence on spurious drug possession charges. Prior to his arrest, Ramazanov was very active on social media networks, in particular on Facebook, where he often posted critical comments about high-ranking government officials, including President Aliyev.

Ramazanov has been behind bars since his arrest near Baku’s “20 January” metro station on 9 May 2013, when he was taken to the notorious Organized Crime Unit of the Ministry of Internal Affairs. Officials claimed to have found 9.05 grams of heroin in his pocket. Ramazanov denies the allegation and says the drugs were planted on him. Drug possession charges have been used in many other politically motivated cases in Azerbaijan.

The blogger was illegally held incommunicado for four days, during which time he reports he was tortured. When lawyer Rovshan Shiraliyev was finally granted access to Ramazanov on 17 May, he witnessed serious bruising and wounds on his head and hands. The lawyer reported that the physical and psychological pressure on Ramazanov resulted in the blogger attempting to commit suicide in custody. Ramazanov was not provided with medical attention, and authorities failed to investigate the reports of torture.

Ramazanov was charged with drug possession under Article 234.4.3 of the Criminal Code. He was held at the Ministry of Internal Affairs for a total of 11 days, although according to law he should have been transferred within 24 hours of the 10 May decision of the Narimanov District Court sentencing him to three months of pre-trial detention. He was finally transferred to the Kurdakhani Investigative Detention Facility on 20 May.

One of Ramazanov’s lawyers, Aslan Ismayilov, faced serious pressure in connection with the case. On 30 May, he reported that he was assaulted and received a death threat by an official at the Organized Crime Unit of the Ministry of Internal Affairs. On 10 September, the Narimanov Court disbarred Ismayilov, depriving him of his legal powers as an advocate in Azerbaijan.

The trial in Ramazanov’s case started on 4 September at the Court of Grave Crimes in Baku. The blogger maintained his innocence throughout the trial, refusing to plead guilty and requesting acquittal. On 13 November, the Court convicted Ramazanov and sentenced him to nine years in prison. Ramazanov has been recognized as a prisoner of conscience by Amnesty International, and is widely considered to be a political prisoner by human rights groups in Azerbaijan.

Ramazanov and the four other bloggers behind bars (Abdul Abilov, Elvin Karimov, Omar Mammadov, and Elsever Mursalli) are not the only Azerbaijanis to be targeted for their critical online postings. At least eight youth activists currently in detention seem to have been targeted in part for their activity on social media networks. Two of the imprisoned journalists, Nijat Aliyev and Araz Guliyev, are website editors, and one of the charges against another imprisoned journalist, Faramaz Allahverdiyev, is connected with his alleged online calls for mass disorder.

This crackdown on freedom of expression online is particularly alarming in light of the dwindling number of traditional media outlets willing to cover topics like human rights and corruption in Azerbaijan. As the authorities make it increasingly difficult for the independent press to survive, it is more and more frequently bloggers and youth activists turning to the Internet to fill the widening information void in Azerbaijani society.

On this World Press Freedom Day, there is a serious need for increased pressure by the international community on the Azerbaijani authorities to cease their restrictions on the independent press and the targeting of bloggers and others for their online postings in Azerbaijan. In the absence of serious international pressure, the press freedom situation seems destined to continue to worsen.

Rebecca Vincent is an American-British human rights activist and writer currently based in London. She is a former U.S. diplomat and has worked with a wide range of international and Azerbaijani human rights and freedom of expression organizations.

Visit our ’30 Days for Freedom campaign’ site for more on jailed journalists www.worldpressfreedomday.org