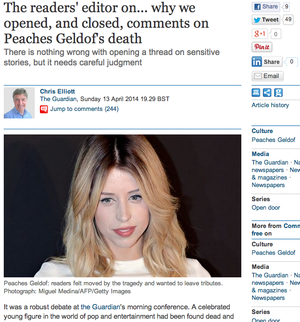 In a 12 April letter to the paper’s readers, Sun-Times Managing Editor Craig Newman wrote that “the world of Internet commenting offers a marvelous opportunity for discussion and the exchange of ideas. But as anyone who has ever ventured into a comment thread can attest, these forums too often turn into a morass of negativity”. Newman emphasised that comments would remain an important part of the website, but would be suspended until they could produce a “productive discussion rather than an embarrassing mishmash of fringe ranting.”

The following day, Guardian readers’ editor Chris Elliott addressed the topic. The British paper had published a piece about the death of celebrity Peaches Geldof, and after much deliberation allowed comments on the article. The move was met with widespread criticism, and in the comment thread the paper attempted to justify the decision. The newsdesk had felt there was an “appetite for people to express their sadness about this terrible news”. But after criticism continued, The Guardian eventually chose to close comments.

How do news organisations contend with this perennial issue?

Elliott speculated whether The Guardian’s article on Peaches Geldof could have been better pitched to encourage respectful responses, asking “whether the opening of comments would have been so controversial if the thread had been dedicated clearly at the outset to the posting of tributes – setting the tone early is important.”

But the potential consequences of commenting are more far-reaching than the sensitivities highlighted by The Guardian, factors that are at the root of the Sun-Times’ decision. WAN-IFRA’s 2013 report “A guide to promoting robust and civil online conversation” highlighted that although editors value the importance of comments, they pose many risks. Low-quality and offensive debates on articles may reflect poorly on the news organisation, but in more extreme cases, they can directly affect the journalism and detract from an atmosphere of free expression. The Denver Post told WAN-IFRA that “some people say they are too scared to be quoted in an article because they are scared of what the commenters will say.”

One of the ways to manage this is banning anonymous comments by requiring commenters to log in with a social media account. Although this improves the quality of debate, it also lowers engagement. As some papers point out, anonymity is also important for those who cannot speak freely under their real name.

WAN-IFRA’s report proposes several “best practices” which can help improve the quality of comments. As well as publishing user guidelines and hiring a devoted community manager, encouraging journalists to get involved in the discussion tends to improve the quality of debate. By promoting the most valuable comments, the website can also foster an atmosphere of stimulating discussion, encouraging people to respond in a similar tone.

A potential solution is a “readers club” such as the one introduced by Gulf News in the UAE: “For people who like to interact a lot with the paper, we have something called Gulf News Readers Club. Highly interactive people are urged to join. They feel more of a buy-in and do a lot of responsible commenting.”

Whether the Sun-Times can use these and other tools to successfully reintroduce comments on their website may give an indication of whether there is a viable solution to this persistent problem.