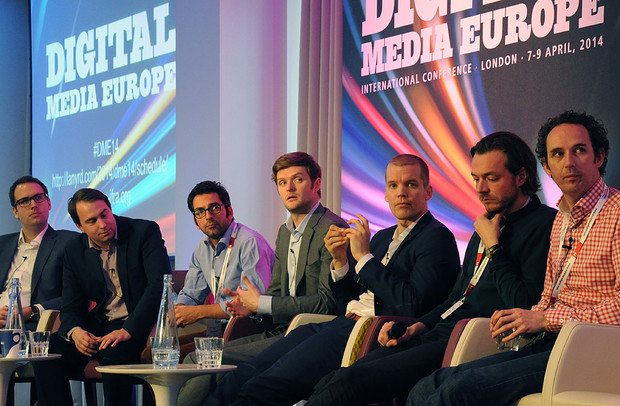 One thing that is clear in the world of programmatic advertising, real-time bidding and the like is “there is no Holy Grail,” said moderator Janneke Niessen, Co-Founder and CIO, Improve Digital and a board member of IAB Europe, The Netherlands. “It is a combination of things that will bring in new revenues.”

Adopting #programmatic wont mean firing your sales team, there will always be need for human relationships. But roles will change #DME14

And it’s important for publishers to get into this market – programmatic is no longer just a way to sell remnant inventory, it’s about premium, video, mobile…and coming in native.

But if you happen to be intimidated or confused with the array of automated advertising jargon, acronyms and more, you are not alone: many publishers are just starting to test the waters for this emerging practice that offers a lot of promise and potential revenue.

Like other emerging technologies or practices, programmatic brings some publishers a hint of unfamiliarity and uncertainty that give them pause.

So why not get into programmatic?

The fear factor exists for a few reasons. Firstly, “most are hesitant out of a fear of cannibalization of direct sales,” said Oliver Whitten, Vice President and Commercial Director of Rubicon Project, which provides technology to automate the buying and selling of advertising. “The market has not reached a real peak just yet, so…. But when it reaches 10-20 percent and you are not there, that’s revenue you are giving away.”

Fabien Magalon, Managing Director, of La Place Media in France, which offers a premium publisher exchange, agrees with Whitten: “But the answer to that reluctance is that the technology providers enable multiple ways to control cannibalisation into deciding how to apply a winning formula. You can implement rate card floors in your market place, and make these fully private. Then you’re guaranteed that the value you derive from RTB will be on parity with your direct sales. Another strategy is what we at La Place Media do; we fully anonymise the inventory we sell under our name, to clearly differentiate it from the branded environment that the direct sales teams of our partner publishers sell.”

Fear extends to the unfamiliarity of this emerging practice, said David Klement, CTO of Publicitas in Switzerland: “The people we try to talk to, they come from not so technical businesses. Fear is a driver. You practially need a ‘translation table’ to inform them about what all this means.”

So obviously education and training play a big role in moving forward.

Rick Welch is leading the programmatic sales efforts for Condé Nast (globally, across all digital mediums). The group handles all programmatic media including private marketplace deals and audience extension.

“We spent the first three to six months teaching and training our staff,” Welch said. “Basically, we were doing ‘programmatic 101.’ It’s about making our salesforce more intelligent. I wouldn’t say they are all there yet, but we are getting there.”

Martin Jensen, Head of the Danish Publisher Network, said: “Instead of hiring new people, we are focussing on education. But we have hired a new Yield Manager.”

Whitten of Rubicon said you will always have sales staff who are data-driven and those who are more performance/pure sales-oriented.

See The First Space’s other Tweets

With so many different players involved and most clamoring to get their hands on publishers’ precious data, there is indeed some relunctance here to take a leap. Of course it helps to have a clear data strategy in place and often there is a misperception that publishers will not control their data.

Welch of Condé Nast: “I can’t say that the entire ecosystem is not trustworthy. I definitely wouldn’t say ‘stop doing programmatic because somebody might lift your data. We do have a data strategy… it’s not perfect, but I don’t think you can abandon programmatic out of fear of losing your data.”

Don’t be shut out of the conversation

Welch said he often hears that “a number of brands don’t feel they need to get involved with programmatic because they think their sell-through rates are good. Even if you have a high sell-through rate, you should be part of the conversation. I think we need to get ahead of the market, and show that it’s not a race to the bottom, programmatic is about workflow efficiency.”

And top management should also be a big part of that conversation, said Martin van der Meij, Head of Revenue Development, TMG, The Netherlands: “Fear is not the big problem in my opinion. Convincing C-level executives that you want to start something new is a challenge.”

Naturally with any emerging technology or practice, there is a learning curve. Magalan of La Place: “We have been innovating very quickly in the first 12 months since launch… very recently, we actually stopped innovating. The market is moving very quickly. Native programmatic will be a big issue. Direct programmatic as well. You have to keep innovating.”

“Publishers should listen to buyers before building out programmatic product/package”, @Robbanjohansson of @Schibsteds #dme14

See The First Space’s other Tweets

Jensen of the Danish Publisher Network: “The most critical mistake was to put everything onto technology, that DSP (demand-side platform) will change the world. This is still marketing and advertising… you still need to talk to the clients.”