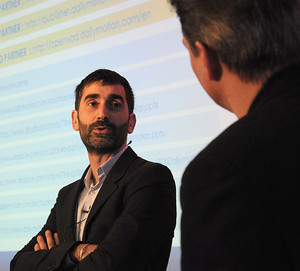 Yet he did his best with his presentation and subsequent answer to that difficult question to make the Dailymotion case.

Those impressive numbers help to back up his claim that, even though Dailymotion is a smaller company than YouTube, it is indeed a very serious player in this booming sector. One that, for example, today sees every person in the Arab region watching an average of 6 video views per day.

Dailymotion is constantly working with its content partners using their player and live streaming tools, such as Le Monde and Le Parisien in France where 100 percent of their video content resides on DM’s platforms.

Some of the key developments Dailymotion have embarked upon recently include the December acquisition of Jillion, a pioneer in HTML5 with its SublimeVideo software. It also opened a studio in December in Paris where companies can book the space for its programming activities, and it will soon launch another in New York.

He said the standard revenue share is 50/50 with its content partners, “but if they bring more of their content to DM’s platforms, it can go up to as much as 80 percent,” something he said in response to the YouTube question that might make it more attractive.