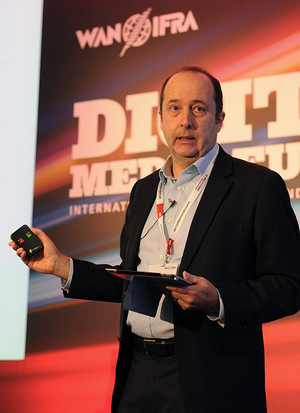 “The top hitting web video news stories last year all have one thing in common,” said Herrmann. “They all have an element of ‘you have to see to believe’. Extrapolating from this learning, we have been working out what we can do to boil this down in terms of formats and formulas.”

He gave the DME audience a run-down of some of the key web video formats now used by BBC Online News:
• Live streams do well, and numbers can be big. They reached 500,000 unique browsers for Margaret Thatcher’s funeral last year.
• Raw footage. This works particularly for breaking news, just clips with no voice, no packaging. During the Boston bombings, they reached 1.3 million viewers instantly.
• Immersive. This is where the BBC news team “reports by doing” – the example Herrmann showed at DME was a team going out in a rib to get aboard a Ukrainian warship currently stuck in the Black Sea due to the Russian naval blockade. The clip was unedited, making it engaging, giving the audience a sense that you were there, feeling somewhat risky, not quite sure what would happen next. “We talk to news gathering teams about how we can get more content like that onto web. It goes with our BBC Global News strap-line “Live the story” – giving audiences sense that they are there.”
• Show & Tell. Again, this is about the reporter in the field showing what’s going on. “We’re trying to get more mobility and fluidity into these types of explanations,” said Herrmann. The key distinction compared to tv is that the reporter gets out of the way of the story, instead focussing on what is going on – as opposed to talking to camera about what is going on in the background. “TV editors like it too, this is an example of web TV coming back the other way,” said Herrmann.

He also said his team is working to get in early enough in commissioning chain for programming outside core news, to make sure they get the right type of content for digital platforms.

“Video is a massive opportunity to be creative, formats are still evolving. Be live, fast, clear, concise, direct and authentic and you will drive views,” said Herrmann.