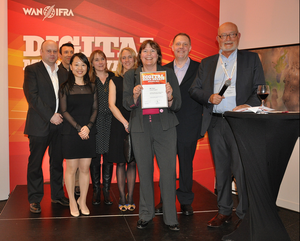 The Awards, run by WAN-IFRA, were presented during the Digital Media Europe conference underway in London this week.

The Guardian was awarded Best News Website. The paper stated in its entry that “2013 was the year The Guardian came of age as a digital news organisation,” citing its comprehensive coverage of the Snowden files. It also highlighted round-the-clock updates in Antarctica Live, and the success of the GuardianWitness app in getting to the heart of stories in Turkey and Syria as examples of its success. The site showed impressive growth – readership increased by 30%, and revenue by 29%.

The prize for Best Data Visualisation Project went to Norway’s Dagbladet, for its interactive graphic on data security, Null CTRL. In its entry, the paper described the scale and relevance of the project: “For probably the first time ever, a newspaper has tested the data security of an entire country. Null CTRL shows, quite specifically, how ignorance and carelessness hurt individuals, companies and critical infrastructure.” The success of Null CTRL lay in both the importance of the research conducted (findings led the paper to alert National Security services), and the effectiveness of the “ambient video and parallax layering” used to display it.

Austria’s Kleine Zeitung won Best Digital Advertising Campaign for their Youtube video encouraging people to go and vote in the general election. In the clip, a hidden camera observes customers in restaurants being served food and drink they have not ordered. The bill then arrives with the message: “Would you accept everything you are served? Go and vote.” The paper said they wanted to make readers aware of the importance of the election in a cost-effective way – the video went viral, with 100,000 views in less than a week and over 200,000 visits to the Kleine Zeitung website within three days. The newspaper spent less than €2,000 on the campaign.

The Best in Tablet Publishing went to the Czech Republic’s “DOTYK” billed as the first tablet-only weekly, with Sweden’s Omni winning Best Mobile Service. Verdens Gang‘s godt.no won Best Outstanding New Project, and the newspaper also won Best Reader Engagement for its coverage of the World Chess Championship 2013. Best Use of Online Video went to BBC News’ “How to put a human on Mars“.

You can find a full list of winners here and the jury member are listed here.