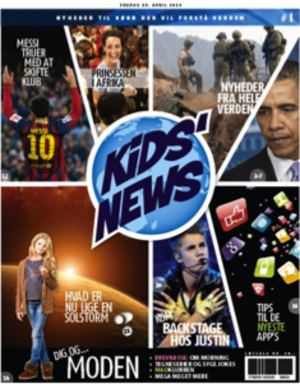 “I believe that a lot of the value in this paper lies in the fact, that it is a paper,” said the editor, Jonas Stenbæk Christoffersen. “It is an anti-trend so to speak. Kids our days are so used to computers, tablets and smartphones, and they are bombarded with fragments of news and stories all day long. This will be the place where they can find peace, won’t be distracted and get an overview. This is also what I hope parents will see as a value.”

The edition will appear weekly and focus on both Danish and global news, with special sections for culture, animals and sports with puzzles and other amusements. The official target audience is between ages 6 and 12 with a special emphasis on 10- to 12-year-olds. The launch coincides with Denmark’s Capital of Children Kids & Media Conference set for Friday 25 April in Billund.

“There will be both news that is directly relevant to the target ages and from the grown-up agenda but told so that children can comprehend. We tell stories on their terms unlike the ‘grown-up-media.’ We will give them a lot of ways into the stories, keep it short and ask the questions they want answered.”

The Kids’ News design is based on research done among school children, teachers and parents and the testing of multiple versions. The staff will include Christoffersen, who was previously deputy national editor, a full-time reporter, an intern, a layout artist and 16 schoolchildren who will function as Kids’ Reporters doing reviews and interviews. There is also a board of children intended to help the editorial team ask the right questions and choose the right subjects.

The business model follows the global trend of having a clear profit goal with a definite element of separation from the main publication. Instead of inserting the section into the print edition as a free supplement, which has been the norm for decades, it is being sold as a distinct entity by subscription and in shops. “The newspaper is written for children, but our targets are both parents and grandparents as we know that they are the actual buyers,” Christoffersen said, noting that the break-even point is “is very conservative, so it is definitely a realistic project.”

A week before launch Kids’ News had 1,000 subscribers.

Kids’ News joins a growing number of similar editions, including three that have been honoured with a WAN-IFRA World Young Reader Prize in the past two years:

• Norway’s Aftenposten Junior for 9- to 13-year-olds that reached 10,000 paid subscribers three months after launch and well ahead of schedule.

• Japan’s Yomiuri Kodomo Shimbun that uses former police reporters to produce much of its content.

Kids’ News will have no advertisements and will feature sponsored content. For example, UNICEF, the Danish Sports Association and the Copenhagen Zoo will provide material.

“We have given it a lot of thought, have very clear guidelines and very clear contracts with all our partners,” Christoffersen said.

Various kinds of sponsored content are becoming an increasingly common practice, and WAN-IFRA has begun exploring the impact of the practice on young readers’ conception and trust of journalism and the potential of publishers, instead, using these editions as an opportunity to teach youth about how professional news differs from other content and about the elements of advertising and its role in supporting journalism.

As a first action, WAN-IFRA has created a “Design an Ad for the 21st Century” kit that describes different kinds of projects that can teach children about advertising and offers some best practice cases that allow children to design advertisements themselves. For details or to join that conversation, contact aralynn.mcmane@wan-ifra.org.

This is a guest post from Dr. Aralynn McMane, WAN-IFRA’s executive director of youth engagement and news literacy.