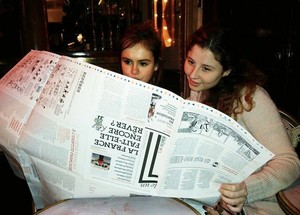 As former editor of Le Monde and now founder of Le 1, Eric Fottorino has embarked on a venture to revitalise and revolutionise the printed press, refuting more widespread sombre forecasts of its decline. He argues that the issue of modern-day newspapers is predominantly rooted in the lack of inspiration and intellectual stimulus within their content.

But as I battled to unwrap Le 1, I couldn’t help wondering: does it really belong on a news stand? Despite the (virtually) fool-proof visual back-page instructions for unfolding Le 1, the edition seemed to have omitted listing a ‘warning’ about the vertigo-inducing effects on readers of its convoluted layout and typically grandiose French “langage de la galanterie”.

But my first (negative) impressions dissolved as I realised that quantity and quality were not in conflict with one another with respect to the form and content of Le 1. If anything, the A1-sized monster mirrors the diversity and depth of its content. The list of international, inter-disciplinary content contributors on the front page of the newspaper offers a piquant appetizer to a lavish main course, promising to satisfy any content palate.

The underlying aim of each edition is to approach one equivocal question from diverse perspectives. For those academically-driven readers, contributing writers include contemporary and classical philosophers, Russian and Vietnamese novel-writers, a historian, and a poet.

For readers who are more artistically-oriented, the contributors extend to a choreographer, photographer and even a board-member of the iconic Academie Francaise. As a Russian-American French literature major, upon seeing an article by Todorov, I could not help but reconsider my initial conclusion that I would never be a weekly Le 1 subscriber. For those in the dark, Todorov is a contemporary Bulgarian philosopher whose work is studied extensively at university level across the globe.

The splash of colour offered by a photographer through a vibrant visual response to the question “Does France still inspire us to dream?” has the effect of de-cluttering the A1-sized layout of the newspaper.

After initially assuming the edition would limit itself by the seemingly narrow focus of its content, I quickly unearthed its value and versatility. Le 1 refrains from deteriorating into a cluttered compilation of short-lived, fast-expiring news headlines to be recycled and forgotten within a week.

Instead, it selectively raises topics which nourish the reader with classical and contemporary knowledge. On one hand, Le 1 can be employed as an educational tool by students and academics from diverse disciplines and demographic categories. It challenges its readers to venture into new academic fields, with topics ranging from culture and history, to sociology and philosophy.

At the same time, Le 1 may be approached as an artistically-driven mind-map offering visual representations, poems brought from different corners of the world, and creative dialogues imagined between deceased philosophers in an answer to the question posed in a headline.

The plurality of perspectives the newspaper presents reflects the vital role of free self-expression in all spheres of life, particularly in the formation of identity and culture, the two forces in a perpetual state of transition. Todorov asserts that “the vocation of a culture, and hence that of identity, is to continuously evolve” – a universal truth applicable within the context of both Le 1’s readers and its team of contributors, signalling the progress, innovation and creative evolution of journalism.

Fottorino presents his newspaper as a voyage of discovery, summoning the press to alter its approach by raising more questions than superficial answers backed by disposable data.

But the essential question remains: can Le 1‘s ambitious intellectual agenda find a diverse audience? And I have to wonder, could this model survive on news stands outside of France, where newspapers occupy a revered place in French cultural life?