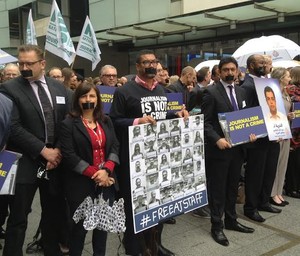 The numbers speak for themselves: UNESCO, has published figures showing that over 540 journalists have been killed in connection with their work since the beginning of 2007. That death toll is arguably the worst for any period in modern history. And for every violent death of a journalist, countless more suffer arrest, imprisonment, assaults leading to serious injuries, and threats to their own lives or those of their families.

The great majority of journalists killed in the line of duty are local journalists working in their own country, and often their deaths are barely registered in news reports. But each death places in sharp relief the vital importance of work done by journalists, often in the face of acute dangers.

Less than three weeks ago, on 20 March, the Kabul bureau chief of the news agency AFP, Sardar Ahmad, was among nine people killed in an armed Taliban assault on a hotel. His wife and two of their children also died.

Such individual tragedies remind us of the witness that independent journalists provide when they risk their lives in conflict zones. Freedom of expression is rightly called ‘an enabling right’ because it makes possible a wide range of other universal human rights.

But the death of Sardar Ahmad, and many others, also brings us face to face with our own helplessness in the face of violence. In fewer than one in ten targeted attacks against journalists are such crimes ever solved. That persistent pattern of impunity has been described as the biggest single generator of more attacks and murders of journalists.

The chilling effect of the increasing violence is multiplied by this impunity – that is, by the obvious breakdown of the rule of law when those responsible routinely go unpunished. Those who aim to silence journalists and other critical voices by force are encouraged to believe they can do so without risk.

Perhaps even more worrying is that the majority of killings of journalists occur not in war zones or in crossfire but in targeted attacks in countries across the globe against journalists whose job is to report and expose sensitive matters such as corruption, crime and abuses of power.

Holding power to account is one of the key things that journalism is bout, and as journalists and editors we cannot be bystanders when the ability to investigate and ask necessary and tough questions is blocked by censorship or by self-censorship.

Major news organisations including the BBC and other international public broadcasters have already stated our concern that this negative environment is impeding our ability to report at first hand from many parts of the world, to local and global audiences.

What is being done about this? The United Nations itself has taken a lead by placing these issues high up the agenda of key UN bodies through a series of Resolutions and a special debate in the Security Council in July of last year.

In this way the governments of the world have collectively told the journalistic community that they should not be silent about this onslaught, but can take action to be part of the solution.

On 18 December last year, the United Nations General Assembly adopted a Resolution on the safety of journalists and the issue of impunity. It called on all UN Member States to promote a ‘safe and enabling environment for journalists to perform their work independently and without undue interference’. Among other things, the text says, this may be done by ‘awareness-raising… among journalists and in civil society, regarding international law obligations and commitments relating to the safety of journalists.’

What are the right responses from the side of the media?

The BBC will live up to a commitment, made in 2012, that it has a special responsibility to show leadership in this area.

However, if I look at the BBC’s record of coverage and influencing in this I think we focus less on threats to media than we might do. As is true of many media organisations. Why is this?

Some of it is a justifiable aversion to journalistic introspection and navel-gazing. Why, editors, argue, should the death of journalist deserve more coverage than any other citizen or protester? We maybe imagine that our readers and audiences see journalistic freedom as a complex abstract issue and it therefore commands few column inches or broadcast minutes.

Also, for organisations committed to journalistic impartiality like the BBC, an excessive focus on an issue can look like campaigning, or a deliberate opposition to certain governments. We naturally recoil from that. In some situations, there may be a wariness of supporting other organisations, especially competitors or those with different editorial values. And many news organisations are wary of conducting any formal advocacy or policy campaigning, even in their own interest, lest it compromise their independence or undermine their ability to operate in certain countries. All those factors can create considerable inertia. What can counter that?

In my view there are powerful reasons to act. Simply, it is the right thing to do. The world’s most powerful news organisations owe it to their fellow news professionals in smaller organisations to help protect them. It is also a matter of self interest and safety. Every time a killer of someone like Anja Niedrignhaus gets away without punishment, your next journalist in the same location is under even greater threat. But for me the strongest argument for our proactive engagement in this issues is that it is not a matter of indifference for the public.

There was good evidence for this in a poll published last week by the BBC World Service in 17 countries. IT found that overall only 40 percent of people polled rated their country’s media as free, down significantly from 59 percent in a similar poll conducted in 2007. [The biggest falls occurred in Kenya (down 37 points), India (down 23 points) and Russia (down 20 points).] In the UK and USA, the percentage thinking their media is free has dropped over the seven years from majorities to minorities 56% to 45%, and 53% to 42%, respectively).

This blog is an excerpt from Peter Horrocks’ opening remarks at the London Symposium on Safety of Journalists hosted by the BBC Global News and the Centre for Freedom of the Media, University of Sheffield in cooperation with the BBC College of Journalism.

A joint statement from news organisations, journalism NGOs and Symposium participants was released at the end of the event. It called on governments to bear the primary responsibility to ensure effective protections for free speech and the safety of journalists.