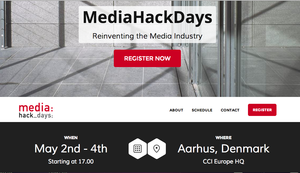 The aim of the hackathon, which will take place 2-4 May at CCI’s headquarters, is to bring together innovation-minded people and give them the opportunity to build new things within a journalistic framework, but without many of the constraints that tend to stifle innovation in the conventional work environment.

We spoke with Signe Jepsen, a journalist who helped co-found the Danish chapter of Hacks/Hackers, about her organisation and MediaHackDays.

“Hacks/Hackers is a global, non-profit grass-roots movement working with the intersection of journalism and technology,” she said. “We’re not related to any media organisations – or anyone, actually. What we are all about is developing journalism with technology and through technology.

The aim of MediaHackDays is to eliminate as many of those obstacles as possible and encourage media innovation.

“Our goal is to do radical innovation. We don’t know what’s going to happen, but that’s our goal,” she says.

At MediaHackDays, participants will have the opportunity to work with some real media metadata from a major publisher, the Guardian.

“We are really excited that the Guardian has decided to supply some of their media metadata,” Jepsen says. “This is something that some journalists are very interested in working on: ‘How can we turn this media metadata into something that will improve our journalism?’ The way I see it, and I don’t know if it’s true about every media organisation, but it seems like there’s a bit of a disconnection between what you can actually know about how your users use your content and how you use that information to improve your content and improve your journalism.”

The ultimate goal of MediaHackDays, Jepsen says, is to allow participants to “liberate the way your mind works … and not say ‘We can’t do this because of this, this, this,’ or ‘We can’t do that because we tried and it didn’t work,’ or ‘We’ve never done it, so it won’t work.’ We want to remove all the stopping points that people usually bump into when they want to do something new and sort of have this playful way of working, because it is so liberating for changing stuff.”

Adds CCI’s Kim Svendsen: “We are honoured and excited that Hacks/Hackers has chosen CCI to be the epicenter of journalism and technology that weekend! We share a common goal, which is to help the news industry move faster into the digital reality, so the partnership for this event is a great opportunity.”

As of this writing there are still a few places left for participation in MediaHackDays, but the event is strictly limited to a maximum of 100 people.

Details and registration are available here.