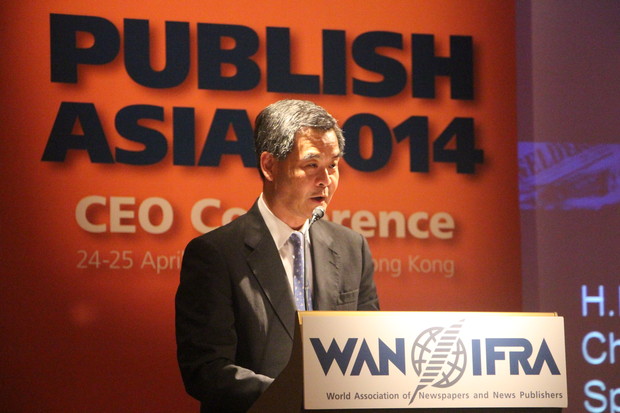 The issue of press freedom was highlighted at the launch of Publish Asia 2014 event in Hong Kong where some 400 key global media executives are gathered at Shangri-La Kowloon to discuss the future of journalism.

Officially kicking off the event, Hong Kong chief executive Leung Chun-ying told a packed ballroom of media leaders that the commitment to having an “unfettered” media landscape in Hong Kong is a priority.

He added that press freedom was not just a constitutional duty but a cornerstone for Hong Kong’s status as a global society.

Before the chief executive took to the stage, WAN-IFRA president Tomas Brunegard had condemned the recent attacks on media figures in the former British colony. Two high level executives from a new daily, Hong Kong Morning News, were assaulted last month. And there was a brutal attack on former Ming Pao chief-editor Kevin Lau in February. Hong Kong has also slipped in the press freedom rankings. It is now placed in the 61st spot out of 180 countries by Reporters Without Borders. Slightly more than a decade ago, it was one of the best places in Asia in terms of press freedom when the ranking was first organized.

“We urge the authorities to pursue justice,” said Brunegard in his opening statement and asked the chief executive to defend and protect journalists.

In his speech, Leung told the audience that Hong Kong took these attacks seriously and highlighted that the authorities had captured the men who had brutally assaulted Lau.

In his criticism of press freedom in certain parts of the world, Brunegard mentioned China where he said “dozens of journalists are still in prison.”

He said: “No journalist should be in prison for doing their job.”

While press freedom remains a vital issue of concern, key media leaders from all over the world will also be discussing other problems that the industry is facing, from falling advertising revenue to the challenges posed by new modes of digital distribution to other interesting topics such as how drones might be used in the field for reporting.

Facing criticism for his response to 12 journalist murders, Mexican president lashes out at WAN-IFRA