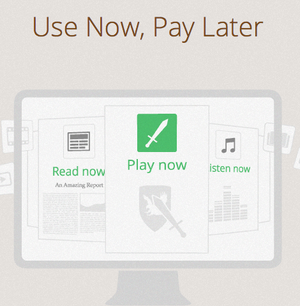 LaterPay is the brainchild of Cosmin Ene and Jonas Maurus, and it’s a simple idea. Instead of signing up for websites or paying several smalls sums for reading articles, users simply “read now and pay later”.

When they reach 5 euros, a bill arrives. This avoids complicated sign-ups, or the transaction charges associated with multiple small payments for each article. It does require an element of trust, however – no payment details are requested at first, so a user can simply choose not to pay and accept their device being blocked from the service.

The app takes “a user-centric approach” providing readers with what they want: easy, affordable access, and privacy. LaterPay is also targeted at everything from microblogs to worldwide news organisations.

As Ene told WAN-IFRA, “by offering pay-per-use and combining this with subscription models, LaterPay offers content providers a toolbox which enables them to address their occasional users and their heavy users at the same time.”

One of Ene’s most intriguing ideas is that the approach could actually encourage people to subscribe, by easing them into the idea of paying for content: “We believe that pay- per-use may become the best subscription generator of all, as people experience the content first, see what they get, get used to it, and may subscribe after they repeatedly like it. Convincing users with pay-per-use has more power than forcing them into subscriptions.”

LaterPay’s CEO also dismisses the notion that people don’t want to pay: “If you let them experience the benefit first, treat them well and protect their privacy, and make it convenient for them to use, the’ll pay. The key words are: benefit, convenience, reasonable pricing, privacy protection.”

If LaterPay works, it could also help the content. Ene believes readers paying for what they read and nothing else means that journalists will respond by producing better material. As he elegantly puts it in what he calls “unquotable terms”, “paid content may become a self-saucing pudding. The more you bite off, the more juicy it gets.”

Despite its founder’s wonderful turn of phrase, LaterPay isn’t the only micropayment method out there.

As we reported last month, Dutch website Blendle has been making waves in the Netherlands with its prepaid system, integrating all of the country’s newspapers on their website so that users can read and pay in one seamless process. The website also allows you to see what’s popular with people you follow, as well as encouraging readers who use content from one particular publication to buy a subscription.

Blendle is currently hatching plans to move into the German market, while LaterPay has seen interest from some of “the largest players in the market”. The key difference, though, is that the nature of Blendle’s service means it has to start anew in each country. LaterPay can integrate into any publication, anywhere in the world, with little difficulty. This could just give it the edge.