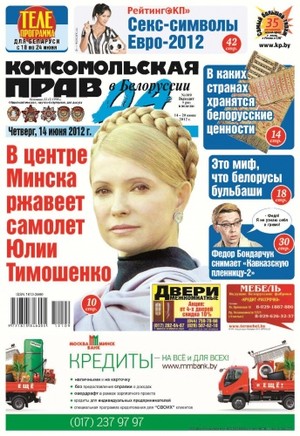 Amidst claim and counter claim about biased and propaganda-infected media coverage of the Ukraine crisis, the Editors Weblog asked Vladimir Sungorkin for his views on the ‘Information Wars’.

Sungorkin is acutely aware of the distortion and increasing divide in East-West reportage of Crimea. He identifies the role of “geopolitical interests” in shaping media depiction of the situation in Crimea. Sungorkin observes that this role extends beyond Russia and the USA into the UK and Germany.

However, while he addresses the reality of “geopolitcal interests” in the propaganda wars between Ukraine and the West, Sungorkin explicitly denies such impacts on Russian newspapers.

As the most historically significant and widely read tabloid newspaper, Komsomolskaya Pravda daily print-run is estimated at 700,000 to 3.1 million copies.

The tabloid was first released under Stalin’s supervision in 1925 and operated as an organ of the Communist Socialist Youth Party until 1991. Aside from being the largest publishing house in Russia, the Komsomolskaya Pravda now owns the eighth-largest news site in Europe.

ASP: In your work as editor-in-chief, what challenges do you face to ensure the independence, fairness and factual integrity of articles on the Crimean crisis?

VS: The main issue with misinformation on the Ukrainian front is the daily inundation of ‘facts’, which fail to provide supportive evidence.

ASP: What are the key differences between Western and Russian media coverage of Crimea from your point of view?

VS: The West depicts a coup and bloody mutiny as a peaceful protest, a self-appointed dictatorship as a government… As for the fascists in Kiev- it turns a blind eye to them entirely. The contradictions between Russian and Western media cannot be eradicated because behind the publications lie geopolitical interests. Throughout the past 300 years in any case this has been an insurmountable obstacle on all fronts (with the exception of 1941-1945, when the USA and Russia were united by a dangerous mutual enemy).

ASP: Which country would you consider presents the most accurate report of the events in Crimea and why? Which publication is the most unbalanced in your view?

VS: Right now Germany has started to present among the most accurate reports on the Crimean crisis. Why? Probably because Merkel and other German politicians are more aware of the dangers of the Crimean conflict for Germany. The least accurate sources of information are the USA and the UK.

ASP: How have you managed verification challenges at the Komsomolskaya Pravda? What types of fact-checking and social media verification do you have in place?

VS: The Komsomolskaya Pravda is the largest newspaper publication in Russia. We have a regional editorial team based in Crimea, which we rely on for validated information. Fortunately, I am personally familiar with Crimea from my regular visits. On the day of the referendum I was personally present on multiple voting grounds, after which I was convinced that the people were 90% in favour of Crimea’s entry into Russia.

ASP: How/when has Komsomolskaya Pravda‘s  independence been compromised or threatened by propaganda or a lack of clarity around the truth?

VS: Incidents of misinformation are infinite. Recently there have been photos in both Ukranian and Western media depicting deserted Crimean storefronts- it was soon determined that the images were actually portraying the night of Hurricane Katrina. Ukranian and Western mass media reported as recently as Monday morning that there were up to 40,000 activists at the March of Truth on April 13th in Moscow. The actual number could not have exceeded 1,500. Such stories have flooded the Ukranian and Western media in recent months.

ASP: How would you respond to the following statement made by one of Pravda’s journalists: “Ukraine… has not emerged as a country”?

VS: I agree with this statement. This is not just the opinion of some journalist – it is a fact supported by all that has been taking place in the Ukraine over the last 20 years.

ASP: How do you think the increasing pressure on independent journalists could be overcome, especially in light of (April’s) news of the murder near Kiev of the journalist Vasiliy Sergienko?

VS: The Ukraine has been caught up in a civil war. A semi-criminal group has seized control over Kiev. Journalists, like many others, are under threat. The country is rife with lawlessness, inflicting the entire population to some degree.

**ASP: As a World Editors Forum (WEF) board member, can you identify any long-term efforts that WEF could undertake to support Pravda and other Russian publications as they seek to accurately and fairly report on Crimea?

VS: Russian mass media does not face this problem. The problems linked to misinformation in mass media are most prominent in Ukrainian and Western reporting on the Crimean crisis.

ASP: Are you interested in extending the Komsomolskaya Pravda’s readership to Anglophone countries, particularly in light of the Crimean crisis?

VS: We publish the Komsomolskaya Pravda in Russian for Russian speakers. In tens of countries – the USA, Canada, Israel and Germany, among others – we would be unable to represent the English speaking audience – the competition is too vast.

*Vladamir Sungorkin sits on the World Editors Forum board.

** The text of this question has been edited to correct Sungorkin’s WAN-IFRA affiliation. He sits on the WEF board, not the WAN-IFRA board. WEF is the editors’ network within WAN-IFRA.