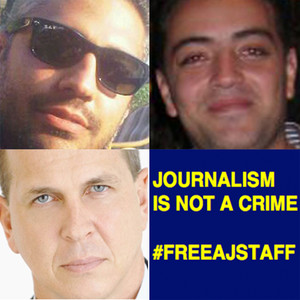 Australian journalist Peter Greste has been in a Cairo prison for 102 days. It took Australia’s Prime Minister nearly 70 days to publicly condemn his arrest on “trumped up” terrorism charges. Greste’s Al-Jazeera English Bureau Chief, Canadian Mohamed Fahmy, is still waiting for Canada’s PM to protest his imprisonment. He was arrested on the same day as Greste, along with their young Egyptian colleague Baher Mohamed. The trio faces court again on Thursday.

In London on Monday major news organisations, journalism NGOs and prominent reporters participated in a silent protest coinciding with the 100-day anniversary of the arrest and imprisonment of the ‘Al Jazeera Three’. The protest, which went viral via social media using the #JournalismIsNotACrime hashtag, featured participants with taped mouths, mirroring the high profile #FreeAJStaff campaign.

From his cell, Peter Greste wrote “How do you accurately and fairly report on Egypt’s ongoing political struggle without talking to everyone involved?” That was an essential question echoed by Al Jazeera English’s Head of Newsgathering Heather Allan who told the London symposium “What we are doing is not a crime…they’re trumped up charges…They’re not only silencing Al Jazeera, forty to fifty journalists and bloggers are in jail. The alternative press is being shut down.”

But while journalists and editors around the world have begun to overcome initial reluctance to act as media freedom activists and reporters of the ‘Al Jazeera Three’ case, the leaders of the Western democracies whose citizens have appeared in an Egyptian court – imprisoned in wire cages – have been shamefully slow to speak out.

In Canada, Mohamed Fahmy’s family and media activists are still waiting for their Prime Minister Stephen Harper to issue a single public utterance in defence of the journalist, who is being held in the harshest of conditions in a so-called ‘Scorpion Prison’.

“We have yet to see the Canadian government come out and publicly call for the release of these journalists,” Executive Director of Canadian Journalists for Free Expression, Tom Henheffer, told the Globe and Mail. “I think that would be an important step in increasing pressure. Because that is ultimately what’s going to get these journalists out of jail, international pressure.”

The Australian Prime Minister’s record is not much better. It was only after Peter Greste called out to journalists from his courtroom cage that Australian PM Tony Abbott acted. “We need him to speak out…Everybody from the White House down has given their support to us. We haven’t heard from the Prime Minister,” the shackled Greste lamented when he appeared in a Cairo court early last month. Within hours of Greste’s moving plea, Abbott finally issued a statement in response to questions from the Australian Broadcasting Corporation.

“We strongly support a free media and the Australian Government is deeply concerned about the charges that have been laid against Mr Peter Greste, and the fact that he is currently subject to criminal proceedings in Egypt,” Abbott said in a media statement. He went on to defend his government’s behind-the-scenes efforts to support Greste. “The Australian Government has made a number of representations in support of Mr Greste’s release.” Then, just a week ago, the ABC reported that Abbott had finally picked up the phone to interim Egyptian president Adly Mansour to ask for Greste’s release. “It is understood Mr Abbott said Greste was only doing his job as a journalist and had no intention of damaging Egypt’s interests,” the ABC revealed.

So, why did it take so long for an Australian Prime Minister to advocate for an imprisoned Australian journalist? Especially one allegedly so concerned about the freedom of expression implications of hate speech legislation that his government has effectively licensed racial vilification; one who was such a staunch supporter of freedom of the press in 2012 that he campaigned against Leveson-style reforms considered by the former Labor Government. Is it because the Australian PM, himself a former journalist, is actually a media freedom lightweight? One could be forgiven for wondering.

Regardless of their motivation, it is difficult to accept the excuse of ‘diplomacy’ as a justification for Tony Abbott’s slowness to act and Stephen Harper’s inaction. The message they have ultimately sent to despots, dictators and emerging democracies is one that emboldens them to continue their repressive actions against journalists, bloggers and freedom of expression activists. Silence empowers abusive states.

As Peter Greste himself blogged “I have sought, until now, to fight my imprisonment quietly from within, to make the authorities understand that this is all a terrible mistake, that I’ve been caught in the middle of a political struggle that is not my own. But after two weeks in prison it is now clear that this is a dangerous decision. It validates an attack not just on me and my two colleagues but on freedom of speech across Egypt.”

Surely the least we can do in response to the unjustified imprisonment of journalists for doing their jobs is to speak up and demand our political leaders do the same?

You can start by joining WAN-IFRA’s 30 Days For Freedom campaign which today highlights the case of the Al Jazeera Three. Make your voice heard using the #FreethePress hashtag on social media.