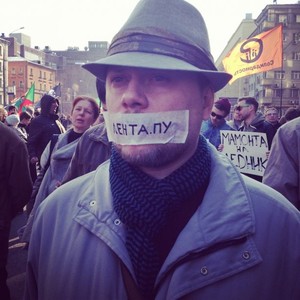 The tension escalating around Russia’s propaganda wars in recent months resonated through the clash of news reports on the “March of Truth”. While the official organizers of the event proclaimed that it gathered up to 50,000 participants, Editor-in-Chief of the newspaper Komsomolskaya Pravda denied this number in a personal interview with WAN-IFRA this morning, painting an alternative picture of only 1,500 activists. Western sources reporting on the event present numbers ranging from 5-40,000.

The event received widespread support from Russia’s public figures, including the contemporary poet, writer and university lecturer Dmitriy Bikov, among other distinguished writers and journalists. In a symbolical act of protest against the politicization of Russian media in the meeting that ensued, this group of participants issued ironic “awards” to those journalists they regard as most representative of the power of propaganda.

Activists could be seen carrying posters reading “Long live a Putin-free Russia!” and “Free the 6th May Prisonners!” in reminder of a subversive incident in 2012 when six activists were jailed for protesting against Vladimir Putin’s inauguration for his third presidential term. Others carried banners displaying flowers symbolic of the Ukrainian flag.

Although the news outlet Interfax reports that the event was met by no immediate opposition from the police force, it remains to be seen whether activists will endure consequences for their actions in the near future, the repressive nature of which the Russian government has never hesitated to implement in the past.