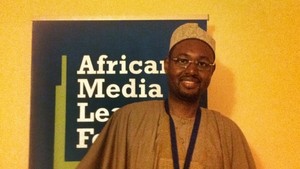 Amadou Mahtar Ba, listed by Forbes as one of 2014’s ten most powerful men in Africa, opened the conference. Founder and Chief Executive Officer of the African Media Initiative (AMI), a pan-African organization aimed at strengthening the media sector in Africa, Mahtar Ba cuts an imposing figure, standing at nearly two metres high.

“What happened on this continent 20 years ago happened…is part of our shared history and we live with it and learn from it as Africans and as human beings.  This is why we’re turning the page on hate speech in Africa and we want to ensure the role of media and journalists in saying never again,” Mahtar Ba said. During the genocide, hate messages through the media such as Radio Mille Collines and some newspapers played a critical role in mobilising the Huti to participate in genocide.

Aiden White from Ethical Journalists Network, which co-sponsored the event, said that the international journalism community recognised that there was a failure of journalism beyond the borders of Rwanda. “It’s a vital lesson of journalism – that when inhumanity is unleashed, we cannot stand idly by,” he said.

Rwanda’s Prime Minister, Pierre Damien Habumuremyi, who addressed the 150 delegates representing media professionals from Rwanda and the continent, echoed these sentiments. “What happened in Rwanda must not happen in any country again.”

It would be easy to believe the claims of the Prime Minister and his boss, Rwandan President Paul Kagame, that Rwanda has risen from the ashes of this horrific chapter as a regional economic power-house. It is a country characterised by strong economic growth, one internationally recognised for its low ranking on corruption indices, as well as free health care for its citizens – citizens who no longer identify themselves as Hutus or Tutsis.

However, according to the Committee to Protect Journalists, behind the shiny veneer of Kigali (it ranks as one of Africa’s cleanest cities) and its mille collines (thousand hills) lies systematic intimidation of journalists and those with voices critical of Kagame’s government.

While the Media High Council of Rwanda (a conference co-convenor) aims to “promote freedom, responsibility and professionalism of the media”, journalists remain hampered by laws which restrict freedom of the press, despite major advances in the country with self regulation and new media laws.

“The best way to counteract hate speech is with more speech”, said The African Editors’ Forum chair, and editor of Burkina Faso’s Bendre, Cheriff Sy. “How can you respond to hate speech when criminal defamation remains on the books?”

There is no doubt that there is a view by government officials that Rwanda is an open democracy, however the door is only slightly ajar, with the Prime Minister making it clear that journalists must play a role in the security of the country, a not-so hidden message of toeing the government line.

“Our constitution allows us practice free speech and it is a core of democracy. The value of free expression and opinions has to be weighed against other people’s right to dignity and respect. The role of journalists in country building is vital as is their role in security of country,” he told the conference.

This was certainly tested last month as ‘Twittergate‘ gripped the nation.  When a former Rwandan security chief was murdered in South Africa, Radio France Internationale journalist Sonia Rolley was targeted for her critical reporting of the incident, suggesting that Rwandan officials could have been involved in the death.  Foreign correspondents who responded to the threats against Rolley were barred from entering the country.

In his resent essay for Time, Pulitzer Prize winning journalist Dele Olojede suggested that Rwanda’s journey to a truly open, democratic country post-genocide must involve promoting leaders who can embrace political dissent. He argued that President Kagame has “lost sight of some of the essential elements of what makes a fully functioning, modern democratic state”.

“Before we are journalists, we are human beings. It’s not enough to have laws that will prevent hate speech.  We have to eradicate the culture of impunity. To prosper, we need to work inside the newsrooms and ensure leadership. This country that has gone through trauma, but we can and must create the conditions where a free press can flourish”.