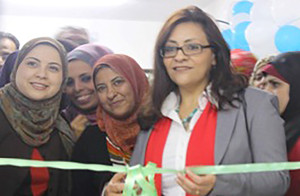 The project, which was established under a local NGO called Filistiniyat, seeks to address and change the relation between women and the media, including the position of women journalists. As a participant in WAN-IFRA’s Media Professionals Programme (MPP), Wafa’ hopes NAWA can enhance its coverage and outreach as a women’s media organisation. Here, she shares her experiences of the NAWA project and the media.

In 2003, I decided to become more active in the media after an incident that I experienced personally. I was one of a group of women who organised activities against the war in Iraq, including huge demonstrations in Ramallah. I was shocked to see one of the pan-Arab satellite channels interview a political leader in the street after the event, presenting him as a leader of the demonstration even though he was not even there. The camera manipulated the scene and the male politician manipulated the language! I contacted the Palestinian reporter to complain about how the channel lied to the audience and stole our efforts. But they ignored me.

I learnt two lessons: firstly, that media is a very powerful tool in shaping public opinion and portraying certain leaders in the spotlight. Secondly, if I were a man, the channel would not have dared to overstep me and replace me with a male politician!

From that day, I started planning to establish Filastiniyat, a media NGO for women and youth. And through the process of monitoring media, providing training to women and youth leaders, and advocating for more freedom in the media, I also became involved in hosting TV talk shows.

“Through my work at Filastiniyat, I realised that for media to be sensitive to gender and youth, we should focus on three pillars: first, to monitor the gender biases and professionalism in the media to define gaps and problems. The second pillar is to establish a directory for women professional leaders in all walks of life, and thirdly to train those women on how to talk in the media and present their views.

I worked on this strategy for three years, but the problem was that media outlets here are conservative, and hosting one woman in a show will not influence the outlet or the Palestinian public. I added a new component to our strategy: to work with those who produce the media discourse, the journalists themselves.

What interested the female journalists most was having a body that unifies them and empowers them professionally. This is why we launched the first Female Journalists Club in 2010, which focused on capacity-building: reporting, audio-visual training, gender sensitive reporting, providing mentoring and internships for recent graduates, hosting international journalists to exchange experiences, in addition to providing psychosocial counselling and well-being sessions, especially for those in Gaza Strip.

Despite all these initiatives however, they still face the challenge of having to abide by their editorial policies, which are usually led by men. Female journalists are left with two main problems: they are trained on gender-sensitive reporting, but media outlets have their own editorial policies, so the training becomes irrelevant or is disregarded. The second and most important problem is that the majority of women journalists work as freelancers and not in fixed jobs, as outlets prefer to hire male journalists who can work long hours and will not go on maternity leave.

Our discourse is almost absent from the media. The Palestinian media portray stereotypes of women as sisters, daughters and wives of a male hero, or we are the victims who cry and weep after the death of a beloved one or over a demolished house. These are all reasons why I thought NAWA could be the voice of women and youth journalists, especially for those women who wish to challenge stereotypes and ways our media portray us. NAWA is not neutral: it is biased by definition to women, to youth and other marginalised groups.

We can now cover lots of stories that get follow up from different decision-makers depending on the case, but I am always proud of revealing a corruption case related to a minister who had to resign afterwards and now faces trial at the corruption court.

In such a complicated situation, women developed their own perspectives on all issues that face Palestinians, starting from negotiation and the principles that should guide them, to what kind of work a municipality should deliver to the people.

The importance of women’s perspectives is the fact that we have different views than men, we look at the comprehensive picture without ignoring the tiny details. We are closer to the aspirations and problems of our society, and thus we can propose a solution that is sensitive to the majority of society and not in the service of the elites.

I believe challenges that all journalists face in general include the Israeli occupation and the danger they face while covering protests against the wall or the settlements. According to the Palestinian Centre for Development and Media Freedoms (MADA), 151 violations were committed by the Israeli occupation against journalists in 2013.  There are also restrictions on movement as Palestinian journalists cannot travel freely between the Gaza strip and West Bank, or to cover news inside Israel such as court cases and activities of Palestinians living in Israel.

On the internal level, the Palestinian authorities in the West Bank and the Hamas government in Gaza are not tolerant towards journalists covering protests against their policies. According to MADA, 78 violations were committed against journalists and freedom by Palestinian parties in 2013.

I personally faced a simple challenge when I first began hosting my talk show. Decision-makers thought I would be soft on them because I was a woman. But after broadcasting three episodes they realised that I was tough. Too tough actually, to the extent that many of them refused to appear on my show and others demanded to get the questions in advance, which I refused to do. In one of the episodes, an influential politician came to the show with 12 body guards, but I believe he meant to intimidate the owner of the station and not me!

The first priority is securing enough funds to hire full time women reporters in Gaza and the West Bank to work for NAWA. Second, we will develop a new strategy for marketing and reaching out to more audiences. And finally, we will establish an investigative reporting section that deals with the impact of corruption and bad management on women and other marginalised groups.