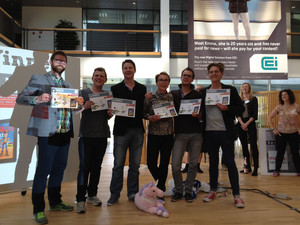 As we previously reported, dozens of developers and journalists from all over the world were in Aarhus this weekend taking part in MediaHackDays, which was organised by the Danish chapter of Hacks/Hackers and supported by CCI Europe (which hosted the event at their headquarters) and WAN-IFRA with the Guardian of the U.K. and Knight-Mozilla’s OpenNews as partners.

Despite only starting well into Friday night, all eight teams turned in finished projects by Sunday afternoon and provided four-minute presentations showcasing them to the judges and other participants beginning at 16:00.

Two other award-winning teams were: the Geo Newsies group, which won the Guardian API award for an app that offered both established/traditional news and social news to travellers within a given country (see the demo on YouTube here), and the CoffeeBear team, which was recognised by the judges for its app, which uses iBeacon to alert/invite nearby users to come in to a coffeeshop, paying customers would then receive credit to access exclusive news content while they are in the coffee bar.

Judging criteria for the awards were based on:

Demo and execution
-What have you achieved?
-Is it functional?

User validation
-Is it useful for anyone?
-How is the user experience?

and Impact
-What is the impact of the solution?
-Is it actually solving a problem?
The five judges were:
Tor Bøe-Lillegraven, Global Head of CCI Business Consulting
Chrys Wu, Global Caretaker of Hacks/Hackers, and Developer Advocate for The New York Times
Maz Spork, Heads of Digital Innovation, Egmont Publishing, Denmark
Stephen Fozard is Media Innovation Hub Project Director at WAN-IFRA
Nikolai Thyssen, Editor at Dagbladet Information and Head of New Media

The Guardian award was judged by Max Harlow and Jenny Sivapalan, both developers who work for the Guardian, which also contributed four Kindles as the prize for the award.

See more coverage from the event on Twitter at #mediahackdays

More photos and stories (in Danish) can be found at: information.dk/mediahackdays