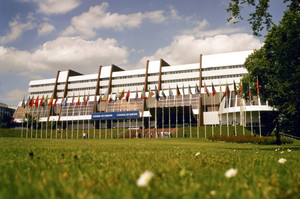 Faced with accusations that the Council had remained relatively quiet on issues of press freedom in Azerbaijan, Höltgen countered that the Council had been outspoken in its criticism of the country, and that “Azerbaijan is frequently reminded of its obligations under the European Convention of Human Rights.” He pointed to the action plan that is due to be discussed in Baku on the 20th of May as evidence of continuing efforts to remedy the situation.

But he also conceded that the parliamentary assembly – where representatives from each member’s parliaments sit – last year made a decision to limit criticism of Azerbaijan, while the same body has voted to suspend Russian voting rights in light of recent developments in Ukraine. And any discussion of membership must be raised at the Committee of Ministers by one of the member states, something which has yet to happen.

This means that despite the Council’s best efforts to improve the dire situation in Azerbaijan, they are hamstrung by unwilling and uninterested member states – and a parliamentary assembly that some argue may have been wooed by “caviar diplomacy.”

As long as Azerbaijan keeps its seat at the table – and French President Francois Hollande’s recent trade visit to Baku doesn’t show much appetite for interference from its fellow members – the Council has no choice but to work with them.

The Council’s spokesman also pointed out that the EU and US have been no more proactive in confronting President Ilham Aliyev, while Hollande didn’t seem keen to dwell on human rights when he was there last week.

Indeed, shortly after Hollande’s departure an Azerbaijani journalist was sentenced to eight years in prison on trumped up charges, while two French journalists were detained and their material seized as they attempted to leave Baku.

Though WAN-IFRA argued that Azerbaijan’s chairmanship may serve to legitimise its behaviour in the eyes of the world, Höltgen believes that the international attention the chairmanship brings may act as an impetus for the country to fulfill its obligations.

And while Höltgen raises a glimmer of hope, there is scant evidence to support his argument. Aliyev and his government seem to give little attention to the Council’s “reminders”, which is perhaps unsurprising given the impunity with which they have been able to act so far. Until member states develop an appetite for action, the Council will be limited to words – and they are likely to go unheeded.