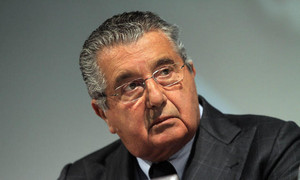 Mr. Mathias Döpfner is an excellent journalist, and a precocious – as well as capable – publisher. He wasn’t even 20 yet when already he was writing music criticism, and was later chosen as Brussels correspondent for Germany’s most serious newspaper, the Frankfurter Allgemeine Zeitung (FAZ). At 32, he was editor of the Wochenpost, a weekly magazine based in Berlin; at 34, of the Hamburger Morgenpost; at 36 of Die Welt, the eminent newspaper belonging to the Axel Springer group, of which he’d later become CEO, well before turning 39.

I have personally known him ever since then, and I believe him to be the most innovative and courageous among European publishers: it took him only a few years to transform a struggling company in the most efficient publishing engine in all Europe, unique in its own kind across the world.

That is why I wasn’t very surprised when only a couple of weeks ago FAZ published Mr. Döpfner’s powerful open letter to Eric Schmidt, Executive Chairman and former CEO of Google. Let me make it plain: I fully share his view when he writes that “We are afraid of Google”, expressing very clearly his many-faceted reasons for doing so, and speaking out against the forced nature of doing business with the search engine of Larry Page, Sergei Brin and Eric Schmidt: “Our business relationship is that of the Goliath of Google to the David of Axel Springer.” We could say the same here at Gruppo L’Espresso: if you don’t work with them, in some instances you don’t work at all.

And yet, as Mr. Döpfner admits:”I am a great admirer of Google’s entrepreneurial success. In just a few short years, starting in 1998, this company has grown to employ almost 50,000 people worldwide, generated 60 billion dollars in revenue last year, and has a current market capitalization of more than 350 billion dollars. (… ) At 14 billion dollars, Google’s annual profit is about 20 times that of Axel Springer”.

Some months ago I wrote in my post on HuffPost Italy that Google’s unmatched enthusiasm, creativity and ability to build value must indeed be acknowledged. However, just like Mr. Döpfner, I am afraid of it: first and foremost, as an Italian and European citizen, because private monopoly of access to digital knowledge is an unprecedented uniformity-imposing tool.

And also because — for years and years, now – we have been reading news about global digital operators stockpiling personal data collected without control, leaving us at the mercy of those who would make wrongful use of them, like some American intelligence agencies (what if Mr. Putin, or some other future regime, ever did the same?).

Regulators’ inability to place potential global and local competitors on the same level ends up favoring the concentration of wealth and power in the hands of the few, thus endangering free-market capitalism itself. Those who are supposed to level the playing field on the national, European and global scale can no longer do their job: since they don’t know what to do, they simply do nothing. And at the end of the day, we find ourselves watching helplessly by as a perfect digital oligarchy takes the place of an imperfect analog democracy.

Mr. Döpfner doesn’t just present examples of this. Like one would say in a courtroom, he brings evidence. And his letter could be the starting point for an European strategy aiming to restore balance to an ecosystem that has lost it. We will take his side.

We then will have to do our part, inside both the European and national parliaments. At the national level I propose we should first of all set a shared goal — the lowest common denominator — focusing on digital investment.

I will give an example based on my personal experience in the publishing industry, where it is now clear that rules are needed, both to give content value, and to prevent global operators from further plundering local resources. Three years ago the Italian Antitrust Authority took notice, advising legislators that “online editorial content, easy to access and reproduce in its digital form, is exploited for commercial reasons by a variety of third parties around the web — content aggregators, search engines etc. Current copyright laws don’t seem to take into account the technological and economic peculiarities of the Internet.”

The Antitrust Authority also manifested its wish for a law setting up a more virtuous cooperation between producers of editorial content protected by intellectual property rights and service providers like Google. And the Italian Communications Regulatory Authority agreed with that.

Enrico Letta’s government was listening, and thus introduced a bill that would’ve changed the rules, so as to allow the reproduction of editorial content by the so-called Over The Top services (OTT) only upon authorization. But nothing came out of this, thanks to our chronic lack of political will. Meanwhile, the German Bundestag was approving a very similar bill.

I wonder whether Matteo Renzi’s government — mindful as it is of its political surroundings — could salvage and relaunch that bill. But what I care most is what will happen at the European level. Thanks to the Italian semester of presidency of the EU, and to the impending changing of the guard at both the European Parliament and the Commission, we could lead the way and turn “Döpfner’s evidence” into an actual industrial strategy. Here are five points that we could work on together:

1. Copyright. I have already mentioned what needs to be done in Italy (although our copyright law does not totally coincide with the law in England or the US), but it is nonetheless necessary a harmonization of laws, either coming from the EU, or from its individual main countries.

2. User data processing. What is lacking is supranational privacy rules, and data-collection norms for OTT services outside of their own competency limits. Laws will need to be constantly updated as technology progresses.

3. Taxation in the digital environment can no longer work the way it used to for only-physical commerce. Tax disparity between OTT services and national operators has already irreparably altered competition.

4. The future of net neutrality is the subject of a heated debated in the United States between big operators and regulators, while Brussels has long been studying it, with no results. We need to speed things up.

5. The Almunia vs. Google dispute proves that Europe can no longer engage in effective Antitrust initiatives, the way it used to at the time of Monti vs. Microsoft. When the next European Commission will take office, this autumn, the fight against the abuse of dominant position will have to be the priority.

It is a tight schedule, I know. But only a debate both wide and high, and quick solutions will allow Europe not to be stranded any longer by its delays and the neocolonial will of our New Big Brothers.

Benedetti will be speaking at the World Newspaper Congress in Torino on Wednesday, 11 June.