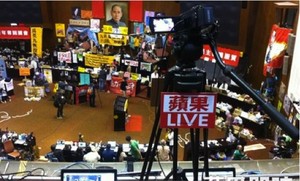 It began as several hundred students occupied a government building in Taiwan to protest a trade deal. Less than two weeks later, over half a million Taiwanese citizens were gathered in front of the Presidential Office, in an event that became known as the Sunflower Movement. Few could have predicted the immense interest the event would attract, but one newspaper was ready to respond to their readers’ demands.

Within 12 hours of the first student occupation, Taiwanese newspaper Apple Daily had set up live streams from inside the occupied buildings, and produced online interactive timelines and maps.

Despite the fact that the paper had never before produced a live stream, the content was well received. “The impact was tremendous and the feedback from the audience was overwhelming,” explained Daisy Li, Animation News Director at Apple Daily.

Yet the success of the output was not down to luck – preparations for a digital response to a major story had been in place for over ten months.

Until July 2013, digital news was subordinate to print news at Apple Daily. Online content was treated separately from print material in the newsroom, and just eight “Real Time News” Editors worked to produce around 150 online articles and fewer than ten videos each day.

After a restructuring of the newsroom last summer, the paper now has 450 staff working online, producing 500-600 articles and 80-90 videos a day.

Page view growth was initially slow, rising from 3-million to just under 5-million per day, and so the reorganisation entered a second phase.

For one month, the head of each news desk focused solely on online news and delegated responsibility for the print edition to their deputies.

The following month, the deputies were put in charge of “Real Time News” and the editors returned to the print paper.

“This step forward proved to be very effective,” said Li. “By the middle of March this year, we could comfortably say that we had built a pretty solid news team who could run a digital news platform on a 24-hours basis and at the same time produce a newspaper which was still number one in terms of readership”.

Over several years, the paper also started to build its social media presence. They now have a team of social media editors who update their Facebook page every thirty minutes.

The Sunflower Movement captured national and international interest when it broke on March 18th, and dominated the front pages of Taiwanese newspapers for an entire month.

Apple Daily was ready for this surge in interest though. “By the time the movement started, the entire newsroom was used to writing for 2 platforms: the digital and the print platform. Thus when the movement started and quickly turned into a “round the clock non-stop” news event, the newsroom could easily synchronize.”

Live-streams set up using Google Hangouts, U Stream, Broadcast Me and Live U broadcasted 850 hours of footage over the course of the movement and ensured they “did not miss any major events throughout these 24 days,” according to Li.

“By the end of the student movement, nobody would doubt that we were a digital first news media,” said Li. “And luckily we didn’t sacrifice the print circulation to achieve that.”

What advice does Li have for other editors to prepare for major events? “There shouldn’t be two newsrooms, one doing the paper, the other doing digital. In my experience, one newsroom doing both proved to be more effective and successful.

“Get prepared and harvest when the time comes. You never know, a Sunflower Student movement may happen sometime somewhere. It would be a great opportunity for the newsroom to turn truly digital.”