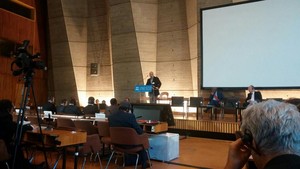 The conference comes against the backdrop of increasing violence and repression of journalists across the world. Killings continue unchecked in Syria, while in Turkey Erdogan’s government has cracked down on freedom of expression, including a temporary ban on Twitter. Ethiopian journalist Eskinder Nega is one of many imprisoned in his country. In Pakistan, Hamid Mir’s attempted assassination has caused an ominous fallout, while in the UK the government has been using terrorism laws to try and quash publications.

Engida spoke about the vital role freedom of expression plays in society, not only as a human right but as integral to good governance and development. He invoked the Declaration of Windhoek in 1991, when African journalists reaffirmed their commitment to free expression at an historic UNESCO conference. As Engida pointed out, the situation has scarcely improved in the 23 years that have passed, and the conference held a minute’s silence for the journalists killed in recent years.

With only seven out of 430 murders of journalists between 2007 and 2012 reported as resolved, Engida emphasised the importance of tackling the issue of impunity, work that has begun with the UN Plan of Action on Safety of Journalists. Other steps include training security forces in Tunisia on the issue of freedom of expression, and a coalition of local authorities in Pakistan.

Engida’s remarks were echoed by Pflimlin, who spoke about hearing of the death of Gilles Jacquier, the France 2 journalist killed in Homs in January 2012. He said that “everyone has had these news of disappearance, hostage takings, killings” but that “freedom of information should be stronger than this blind violence, and it is.”

And the protection of journalism also encompasses education and funding. Pflimlin gave the example of teaching Tunisian journalists how to create fair, independent journalism rather than “government communiques”; and the support of an underfunded television station in Romania.

Ahmet Sik, the World Press Freedom Prize Laureate, closed with an impassioned speech about the freedom of the press in Turkey. He criticised the “pseudo-journalists” in the country, who toe the line set by the “regime of oppression” that is the Turkish government. And even those not imprisoned – there are 40 journalists incarcerated in Turkey – live in “invisible prisons” created by censorship and the fear of persecution. “If journalists speak in Turkey, it’s thanks to courage and not to the existence of democracy there,” Sik said.

*The World Editors Forum is staffing the English language UNESCO Youth Newsroom at the conference.