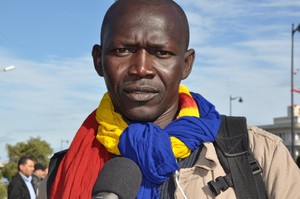 The blog became a thorn in the Chad government’s side, and last year President Idriss Déby sent his Minister of Justice to Dakar, where he showed his counterparts evidence of Nguebla’s correspondence with another Chadian journalist who had recently been arrested. The Senegalese authorities were expected to act.

Why Senegal caved under the pressure is unclear, but the following day Nguebla was ordered to report to the police. Just before his incarceration he spread the word to friends, triggering a global campaign to protest his arbitrary detention. This wave of support prevented his deportation to either Chad or Mali – where the former country has a military presence – and instead he was sent to Guinea.

Since then Nguebla has been exiled in France, where he is staying at the Maison des Journalistes, a refuge for persecuted journalists. On the second day of the UNESCO conference, he described it as “an opportunity to thank all those who supported me” but said that there was also “a feeling of sadness because if you read RSF reports, you realise that journalism has become the target of repressive powers.”

And Nguebla was not optimistic about significant progress being made at the conference: “At these conferences, forums, international symposiums, there are often discussions but not actions. There’s often no follow-up, there’s no serious action taken afterwards.”

He argued that his own country was particularly neglected, and that this inaction might be rooted in political interests: “…unfortunately no one is talking about the situation in Chad… [in Europe] we need Chad for the war on terrorism, but we don’t need Chad for democracy,” he said.

And despite his campaigning, he says the EU has refused to change its approach to funding in Chad, money which he says is squandered by the President and his cronies.

While Nguebla described the issue of freedom of expression as an “…enormous challenge for the whole of humanity”, he recognised that he and his colleagues must take it upon themselves to ensure that their freedom is respected, echoing Al Jazeera‘s Mostefa Souag in yesterday’s discussion about safety of journalists. “Everything depends on the journalists, they must fight for their cause.”