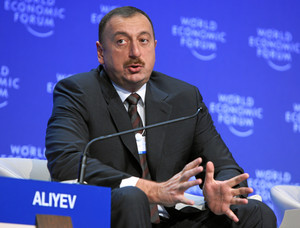 DAVOS-KLOSTERS/SWITZERLAND, 29JAN09 - Ilham Aliyev, President of Azerbaijan, is captured during the session 'Energy Outlook 2009' at the Annual Meeting 2009 of the World Economic Forum in Davos, Switzerland, January 29, 2009. Copyright by World Economic Forum swiss-image.ch/Photo by Christof Sonderegger

Following elections marred by reports of widespread malpractice in October of last year, President Ilham Aliyev oversees a government rife with corruption and intent on stifling the independent media. UK-based Transparency International ranks the country at 127/177 in its Corruption Perceptions Index. And Reporters sans Frontières places Azerbaijan at 160 in its Press Freedom Index, hovering just below Egypt, where the imprisonment of Al Jazeera staff continues to attract widespread global condemnation.

Azerbaijan’s repression of free speech includes the imprisonment of two journalists featured in WAN-IFRA’s “30 Days for Freedom” campaign. Hilal Mammadov, Editor-in-Chief of minority-language newspaper Tolishi-Sado (Voice of Talysh) and Avaz Zeynally, chief editor of the independent Azerbaijani daily Khural, were both arrested on spurious charges and have been imprisoned since 2012 and 2011 respectively.

Eight other journalists are currently in Azerbaijani prisons according to the Committee to Protect Journalists, while IFEX reports that there have been 250 attacks on journalists since 2005. Any dissenting voices live in near-constant fear of harassment, imprisonment or worse.

Despite this, the Council of Europe remains remarkably quiet on the topic of human rights abuses in the country. In a 2010 article for the Guardian, journalist and barrister Afua Hirsch called into question Azerbaijan’s membership of the Council after the suspicious death of an imprisoned journalist and the arrest of several of his colleagues. She asked the Council’s Secretary-General Thorbjørn Jagland why the country remained a member, and met with this response:

“I don’t see how we can start the process of excluding members. The question is whether we are able to influence developments in Azerbaijan. If yes, then there is a role for Azerbaijan in the Council of Europe.”

Jagland clearly had a point, given that the inclusion of Azerbaijan presents an opportunity for the Council to be actively involved in the improvement of the country’s human rights record. But four years on, his comments appear increasingly empty. If anything the situation has worsened since 2010, with the Council of Europe’s attempts to “influence developments in Azerbaijan” merely resulting in a further drop in the country’s RSF ranking, and the arrest of journalists like Mammadov and Zeynally.

The Secretary-General’s remarks on “excluding members” appears to directly contradict the organisation’s statute, which demands that member states ensure the “enjoyment by all persons within its jurisdiction of human rights and fundamental freedoms,” and states that any member “which has seriously violated” these conditions may be suspended from the organisation.

That the Azerbaijani government’s disregard for human rights and press freedom constitutes a “serious violation” of the the standards expected by the Council of Europe is surely in no doubt, while the country’s appalling human rights record suggests that the policy of inclusion is not holding President Aliyev’s government to account. The accusation is that the reverse is happening.

Why Europe fails to act is unclear, but regardless the Council’s inaction is compounding a dire situation in the central Asian republic, and Azerbaijan’s chairmanship will only serve to reinforce this. But the next six months offer an opportunity for the Council to not only encourage but demand progress, including the release of imprisoned journalists and the implementation of measures to protect the country’s independent press. At the end of its tenure, it is not only Azerbaijan but also the organisation it has chaired that will be held to account.