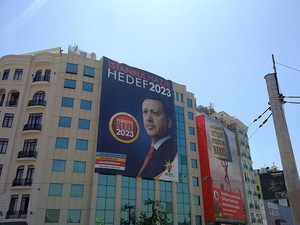 According to the Committee to Protect Journalists, at least 40 journalists were in Turkey’s prisons at the end of last year. But since then 24 have been freed: at the end of March eight were released after special anti-terrorism courts were shut down the previous month, but their charges have not been dropped.

And in April pressure from the European Commission and organisations like the European Federation of Journalists led to further judicial reform, with pre-trial detentions limited to five years. The changes rendered Füsun Erdoğan’s incarceration unlawful, and after a series of appeals she was released, almost eight years after first being arrested.

But the charges against Erdoğan remain, and she is unable to leave the country. Whether she will return to prison is unclear, but it does indicate that any optimism about press freedom in Turkey could be premature, as it continues to be stifled in other ways.

Despite these improved statistics on the imprisonment of journalists, US think-tank Freedom House recently downgraded the country’s press to “not free”: in addition to widespread online censorship, the government continues to interfere with editorial decisions, including forcing the dismissal of journalists who write articles critical of the administration.

In an article for Al Monitor, Kadri Gursel argues that as opposition to Prime Minister Recep Tayyip Erdoğan grows, his authoritarianism only grows with with it. On the 10th of May a speech made by the chairman of the Union Turkish Bar Association infuriated the PM so much that he stormed out of the room. When Erdoğan beckoned for President Gül to follow him, the country’s head of state did so.

“The walkout was a visual illustration of how the state protocol and hierarchy has collapsed, giving way to the real political hierarchy — the one of the “one-man regime,” Gursel writes.

The suggestion is that Turkey is becoming a one-man regime intent on silencing any criticism, and the violent reactions of Erdoğan and his adviser Yusuf Yerkel to the Soma mine protests indicate that this is only escalating.

After the reinstatement in October of Turkey’s EU accession talks, the release of Füsun Erdoğan and her colleagues suggests that pressure from the European Union could be having at least some of the desired effect.

And a former EU diplomat, speaking to WAN-IFRA on condition of anonymity, does not believe the institution will turn a blind eye: “If all the other stars aligned – strategic, economic, public opinion on immigration – the EU would still not ignore human rights.” Indeed, negotiations are in the balance amid recent criticism from German politicians.

But the EU’s ability to influence events in Turkey may be waning. As the diplomat points out, “EU accession is not a decisive factor at present, witness the new Internet law which came at a time when EU/Turkey relations seemed to be improving.” And if Erdoğan replaces the more conciliatory Gül as President in the August elections, the country may only become more isolated, and Erdoğan’s grip on the press even tighter.