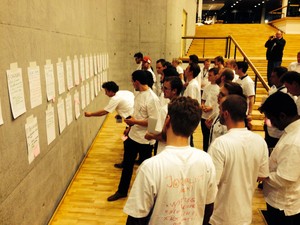 As we reported in an earlier post, the aim of the hackathon, which is taking place at CCI’s headquarters, is to bring together innovation-minded people and give them the opportunities and tools to create new things within a journalistic framework.

To this end, participants have the possibility to work with real media metadata supplied by the Guardian as well as a wide variety of gadgets and accessories including two drones.

After four “bootcamp sessions” Friday afternoon, where participants had the chance to learn more about “How to think like a developer” and “How to be a developer-journalist,” from experts such as developer Jens Christian Hillerup and Knight-Mozilla Fellow Aurelia Moser, participants gathered in the large, wide open space of CCI’s central area, for an introduction to the event from Lasse Chor.

Chrys Wu, Developer Advocate at The New York Times, Global Caretaker of the more than 50 chapters of Hacks/Hackers and one of the judges for MediaHackDays, told participants they should see this weekend as “a fun opportunity to work with people you don’t normally work with.”

As part of the introduction, Signe Jepsen, a journalist who helped co-found the Danish chapter of Hacks/Hackers, noted that a goal of the non-profit, grassroots movement, is to help reinvent journalism through technology. She encouraged participants to mix their skills when forming their teams because “developers are good at some things and journalists are good at other things. We want to mix your skills to make magic happen.”

Some 30 project ideas were pitched by participants last night during very brief presentations, including, for example, an idea to help “gamify” news, another to help give more context to stories, and one that would help journalists determine the most effective headlines to put on articles in order to draw the most readers.

Each pitch was written up and posted on the wall (see picture), where participants voted on their favourites by tacking sticky-notes to them. The ideas with the most votes (including the three mentioned above), were selected and participants began gravitating to the ones that most appealed to them to discuss development possibilities and determine teams of three to six people. Teams then set to work (at approximately 22:00!) to more tightly define their ideas and how to go about making them a reality.

Participants are largely free to determine their own schedules for working, sleeping and eating for the rest of the weekend, with mattresses and shower facilities available onsite as well as plenty of excellent food and refreshments available throughout the weekend, courtesy of CCI.

This afternoon, the teams can make “a call for needs and skills” and will also provide a brief update about how their projects are developing. Most of the next 24 hours will be devoted to continued development.

Presentations and judging set for Sunday

Tomorrow morning, participants will have another chance to “call for help” with their projects and in mid-afternoon will begin preparing their presentations, which will start at 16:00. Afterwards, the judges will vote for their favourites, and a presentation of awards is set to take place around 19:00 Sunday evening.

See more articles (in Danish) and photos from the event at: information.dk/mediahackdays