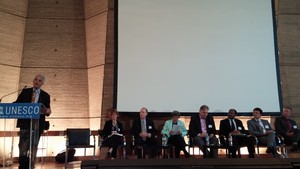 Callamard was speaking at the World Press Freedom Day conference in Paris.

If there was one thing all speakers agreed on, it was the crucial role that a free and independent media plays in international development.

“Without the free-flow of information, I am convinced that reaching the millennium goals will be nearly impossible,” said Robert Zaal, Director-General of Radio Netherlands Worldwide, in a statement that was echoed by others throughout the 90 minute session.

Guy Berger, Director of Freedom of Expression and Media Development at UNESCO, chaired the discussion, and began by asking speakers to offer their definition of the term ‘development’.

Leon Willems, Chairperson of the Global Forum for Media Development, suggested that the problem, when thinking of development, is that “…we think we can develop people. But people develop themselves.”

By far the most popular response to the opening question was given by Naranjargal Khashkuu, Chairperson of Globe International in Mongolia. She began by stating that “Development is harmony in society, created by equality. Citizens have equal opportunities, equal choices, and equal access.”

Then, in a move that was received with laughter and applause from the audience, she broke into song, chanting “Give me freedom, give me fire, give me reason, take me higher” from the World Cup 2010 song, Wavin’ Flag.

Larry Kilman, Secretary-General of WAN-IFRA suggested that press freedom is often viewed as subordinate to other, more pressing, concerns such as “health and clean water,” in developing countries. But independent media are as important to development as the most basic services, he argued.

Berger picked up on this comment, and asked both the audience and the panel to decide if “…it is fair to say that outside of this panel, the mainstream view of development does not recognise much role for freedom of expression.” All of the panel were in agreement with the proposition, as were all but one member of the packed audience.

Jeanne Bourgault, President and CEO of Internews stated there there was a “…clear, causal effect between reductions in violent conflict and free media”, as with “economic development, health and free media,” and argued this needs to be more widely-known.

So, how can development of independent media be recognised as part of development, and how can it be stimulated? As Larry Kilman argued, “China is a terrible example to hold up as evidence that you don’t need press freedom for development. GDP alone is not a sufficient metric.” He said that progress must be measured in long-term, rather than short-term metrics.

Ernest Sagaga, International Federation of Journalists, called for investment in media, yet also argued that we need to “…make journalism less dangerous as a profession.” He demanded an “…end to attacks on journalists,” and said that only then would independent media be properly stimulated.

The discussion then, finally, turned to the role of the internet: “Some countries aren’t connected, and I urge UNESCO to raise this in its entirety in a coherent way, and make it a prime issue in their report to the Secretary-General”, Leon Willems challenged.

“We will fight our fight. You must take this on as your raison d’être. Internet access, opportunities, protection, expression. It’s a package. You can’t dissect it, or it’s meaningless.”

Concerns were raised about the lack of discussion of mobile devices during the plenary (despite Berger’s reading of audience tweets from an iPad during the session!), while Rony Koven from the World Press Freedom Committee questioned the need for a “moral justification” to journalism as implied by the development debate itself. “Journalists going around willy-nilly, finding out information – that is an end in itself.”