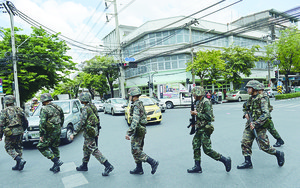 The media crackdown began on 20 May, when the army took control of Bangkok. Soldiers entered several TV stations, either ordering them to stop transmission or replacing their broadcasts with army-approved messages. Academics, activists and former civil servants were warned not to give interviews to the media.

Following the coup two days later, restrictions have become even tighter. While TV stations have resumed broadcasting on the understanding that they will not cover “politically sensitive material”, wide-ranging decrees effectively ban any open discussion of the situation.

Speaking to WAN-IFRA on Friday, when the situation remained relatively stable, Gayathry Venkiteswaran of the Southeast Asian Press Alliance predicted a serious escalation. “[The] prospects are grim…In the first few weeks it will be rather mild, depending on how the Red Shirts [supporters of the ousted government] retaliate. But then we can expect much higher levels of violence and crackdown.”

Already Venkiteswaran’s predictions are becoming reality: last week reports suggested that newspapers were largely functioning as normal. But since then 18 editors have been “invited” for a “talk” with the junta. The Nation journalist Pravit Rojanaphruk was separately summoned, and most recent reports suggest he was detained and taken to an undisclosed location.

On my way to see the new dictator of #Thailand. Hopefully the last. #freethailand #Thailand #ป #รปห

170 people are talking about this

Censorship will now stretch to social media networks, which were awash with anti-coup sentiment last week. New orders from the junta oblige internet service providers to suspend news and information “that are distorted, inciting to unrest, and undermining state security and public morale.”

This heavy-handed repression is only likely to get worse. The King’s declaration of support for the coup may inflame tensions with the Red Shirts, and already protesters have been arrested in Bangkok.

Venkiteswaran expressed optimism about the effectiveness of international sanctions, but so far the US has only suspended its relatively meagre military aid to the country, a move unlikely to have any impact.

While the focus remains on the actions of the junta, Venkiteswaran also argued that the news media’s own weaknesses have allowed the situation to deteriorate to this point. “It does show that the media has failed to prevent these kinds of external, heavy-handed powers deciding what they need to do.

“So I think they need to do a little bit of self-reflection about their own ethical practices. Because of those ethical lapses, it’s made the military more bold in going after the media.”

Whether the media can hold the authorities to account may depend on how strictly the junta enforces its decrees. But as the military suspends civil laws and declares that protesters will be denied lawyers and tried by court martial, there is little cause for optimism.

Indeed, as this article was being edited, international journalists based in Bangkok were live-tweeting a military address aimed at the foreign press, indicating the possibility of a crackdown.

Army loudspeaker in English: ‘message for the foreign press. Game is over. Go home’ – police moving forwd into square 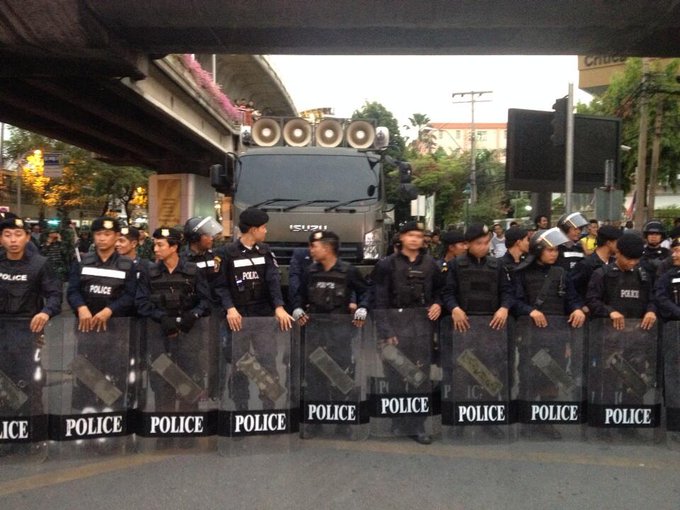 86 people are talking about this