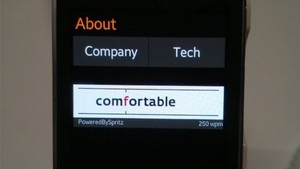 Speed reading software will “take off” to become “the main source of reading on small screens in the near future,” according to experts.

Markus Jönsson, a Digital Planner and UX expert at Luxus, Helsinki, has described the technology as “the missing piece of the puzzle” for news publishers to “convey content to users effortlessly.”

The software uses a technique known as Rapid Serial Visual Presentation (RSVP), which presents words at an adjustable speed one at a time, in exactly the same spot on the screen. This ensures the eye remains fixed as the words are read.

According to developers of the software, we spend 80% of our reading time moving our eyes from one word to another. By eradicating these eye movements, or “saccades,” researchers claim we can increase our average reading speed from around 250 words per minute (wpm) to 600, or even 1000 wpm.

Much of the hype around the software concerns its potential to be integrated and used on tiny screens, such as wearables. “One of the most obvious applications I see for speed-reading is in smart watches, where it’s almost impossible to read longer articles of text without such technology”, said Jönsson.

Spritz, one of the biggest speed reading start-up companies, has already joined forces with Samsung to integrate their software into the Galaxy Gear 2 smart watch.

Spritz also integrated its software with the website of German newspaper Bild as a trial in April of this year, and the success of the partnership suggests other news publishers may soon follow suit.

“Germany’s largest publication integrated Spritz onto both its website and mobile site, enabling visitors to easily ‘Spritz’ any article for a trial period of 24 hours,” explained Frank Waldman, Spritz co-founder and CEO.

“As a highly influential publication with a reputation for pushing the envelope in terms of content and innovation, BILD.de’s implementation of Spritz allowed for a wide audience to experience the technology and consume information effortlessly.”

Sandra Petersen of Axel Springer, Bild’s publisher, agreed that the trial was a success, saying, “On the test day, we noticed our readers had a great interest in the technology.”

“So far, so good” said The Old Reader’s Ben Wolf on the new partnership. “We have had a couple of thousand new sign-ups since the day we integrated with Spritz, and about 500 of our existing users have enabled it too.”

“Feedback from our users has been great – we’ve had several competitors of ours saying they want their RSS reader to implement it.”

But is speed-reading software only suited to shorter content, such as RSS readers? “I personally use it for the longer pieces,” added Wolf. “I’ve always got over a thousand articles I’m trying to read – a big backlog. It’s great for getting through that.”

Claire Wardle, a research fellow at Tow Center, says the technology is “fascinating.”

“It’s tempting to say this will never catch on, as it detracts even further from the experience of reading a newspaper. But as I watch even my Mum drop her printed newspaper (something she vowed never to do) and move to reading articles online, it’s astonishing how quickly our behaviour is evolving.”

Not all are convinced by the new technology, however.

Eamonn Byrne, Director of The Byrne Partnership Ltd, is sceptical of Spritz’s claims that you can retain as much information by speed-reading than reading normally.

“I don’t believe it,” he said. “I’m always critical of these types of research. Yes this technology is brilliant and fantastic, but why would you want to read on a smaller device anyway?”

Using Spritz, I read War and Peace in an hour. It’s about Russia.

For Jasper Jackson, editor of The Media Briefing, the rise of speed-readers is representative of a change in the way content is delivered from newspapers to readers.

“It seems inevitable that new ways of delivering written words, but also words generally, through audio and other means, are going to have a huge impact on newspapers.”

“There are a lot of very clever people working on ways of delivering information more quickly. In that situation, why wouldn’t people use it if it’s just as effective?”

To see what this article looks like when speed read at 450wpm, play the below video, or download one of the many free speed reading apps and plug-ins available, such as Spreed.