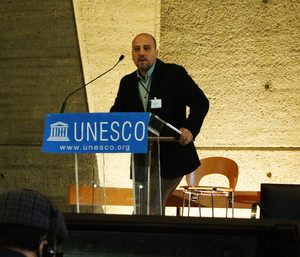 Sik is a freelance investigative journalist, photojournalist and writer who has reported for Turkish newspapers Cumhuriyet, Everensel, Yeni Yuzyl and Radikal. He has also worked for Nokta magazine and Reuters News Agency. His work focuses primarily on corruption and human rights abuses.

Sik currently faces charges for his unpublished book, The Imam’s Army which explores the work of Islamic opinion leader, Fethullah Gulen and his Gulen movement. Sik was arrested in 2011, prior to the release of his book, on charges being linked to terrorism organisations, Ergenekon. The book was seized and banned and his offices of the book publisher were searched.

Sik was released from detention in March 2012 and continued to pursue his work as an investigative journalist. He is now awaiting trial, and if he is convicted, he will face 15 years imprisonment. This case contributed to serious concern for the state of press freedom in Turkey.

In his address at the World Press Freedom Day Conference today, he spoke about the effects of censorship and a lack of press freedom.

He also discussed how a lack of press freedom has impacted the ability of both himself and his colleagues to carry out their work as journalists.

“[My colleagues] can’t write a single article which criticises the government. They will lose their jobs or find themselves in prison,” he said.

“We do speak only thanks to our courage and not to the fact that there is courage in journalism today”.

The award ceremony took place at UNESCO Headquarters in Paris on May 2nd.