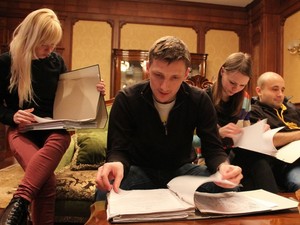 In February this year, WAN-IFRA reported that approximately 140 media workers had been attacked or killed in and around Kiev as the EuroMaidan revolution escalated, before deposed president Viktor Yanukovych fled. But the safety threat has now shifted to Crimea following its annexation by Russia, as war looms.

Akymenko, the former Deputy Editor and head of investigations for Forbes Ukraine, spoke to the World Editors Forum‘s Julie Posetti.

Oleksandr Akymenko: In Crimea, in the eastern part of Ukraine, there is enormous danger for journalists to work because these separatists who want to cut the country into pieces are extremely cruel and really well-equipped and really… journalists are like targets for the separatists.

Posetti: Can you share some stories of journalists who are there, what their experiences have been?

Oleksandr Akymenko: I know that, for example, my colleagues were beaten during the Crimea campaign, like the correspondent of the biggest Ukrainian TV channel was beaten in Crimea, and investigative journalists from our YanukovychLeaks team were also beaten in Crimea. And it’s very dangerous to work there because they check on the border whether you’re a journalist or not, if you have the journalist card you are in danger. So they [journalists] should hide, they should not represent themselves as journalists, and it’s the same situation as in EuroMaidan, when government troops just shoot into people… we were major targets. And we are now looking at the situation and we see that for Russian troops, the journalists are major targets.

Posetti: In terms of a response from the global journalism community, what needs to be done now?

Olesandr Akymenko: It’s a huge paradox, but I think the only way to save Ukraine is to save Russia and make Russia a democratic country. After we fight and we make this victory from Yanukovych, from the corrupt leader who stole everything, now the national ideology is “leave us alone.” And you can’t even imagine the level of propaganda in Russian TV channels, it’s absolutely unbelievable. They just point at black and say white, and point at white and say black. It’s absolutely cruel manipulation, and most people who live in Russia, they have such an incorrect impression about all the events which were beginning in last November and which are now in Ukraine still. …They are brainwashing people, they are actually creating the same as Goebbels created in Germany in the 30s.

Posetti: You think it’s that bad, Russian propaganda is at Goebbels levels?

Oleksandr Akymenko: It’s that bad. Europe can’t really understand how serious the situation is, and Ukraine will pay the price. And Europe should understand that Russia will not stop at Ukraine. They’re really trying to tell Russians that they are very special, that they are the chosen nation. I’ve heard that somewhere, you know.

Posetti: How should the journalists in the rest of the world be responding to the Russian propaganda you describe?

Oleksandr Akymenko: The first recipe is fact-checking. Because the Russian propaganda influenced a lot in Europe. Don’t use Russian sources. Don’t reprint Russian sources’ information. 80% of it is false. So it’s the first and only recipe. [Akymenko also suggests using Ukranian fact-checking website StopFake.org]

Posetti: So fact-checking is very important – how should journalists in the West approach reporting the crisis? Where do we go for reliable sources?

Oleksandr Akymenko: There are civic organisations which are created by experts, and they…produce a lot of good information in English and German and journalists of the world could use the Ukrainian Media Crisis Centre because they invite only the people who are influential in the situation and people who are in positions of power and even different kinds of military specialists who are commenting everything online, and the UMCC is the way to take the information and verify the sources. On the Ukrainian Internet there is a lot of fake news because Russian bots work very well. They are trying to put a lot of information into the Ukrainian media field. But for this time, four or five months from the beginning of protests, Ukrainian media and activists online really improved their media culture and they are trying not to publish non-confirmed information. So Ukrainian editions like Liganet, like Ukrainska Pravda, are quite trusted sources… the English language paper is Kyiv Post, it’s the major source about Ukraine and they have no trouble with fact-checking, they’re very professional.

Posetti: One of the things Western journalists are talking about is being bombarded by propagandists trying to misdirect research. I wonder if it might be worthwhile, publishing a curated list?

Oleksandr Akymenko: There are several communities on Facebook like Euromaidan and Euromaidan SOS, who are very professional in fact checking because they have a huge audience, and I believe they have an English language version. These two are very trusted sources and they have only trusted information.

Posetti: What about global journalism organisations? What needs to be done?

Oleksandr Akymenko: The journalists need to look at the perspective of war because the risk of war is enormous, journalists should be taught to work in the conditions of war, and we’re really need protections for journalists…flak jackets, for example. It was very important during on EuroMaidan for journalists because a lot of journalists were beaten and shot in the streets and these jackets could save lives. So training for working in conditions of war, protection tools we will really need. And the international organisations could also pressure Russia to destroy this propaganda machine, because you know we could not even imagine what he will create. Because he is now creating the millions who will go to Ukraine and will kill.

I know the American army and the Pentagon will give some assistance like different kind of protection tools, not guns but financing for Ukrainian army, but who will protect journalists? None of them have worked in these conditions before, there was no war since ’45, they all work in press conferences, they were all sitting in beautiful buildings and walking in the streets with mics, but not on the battlefield. So Ukranian journalists need protection and if something like UNESCO will support them it will be very, very good.

*Note: The International News Safety Institute, INSI (a WAN-IFRA partner) is a resource and support network for journalists facing danger.