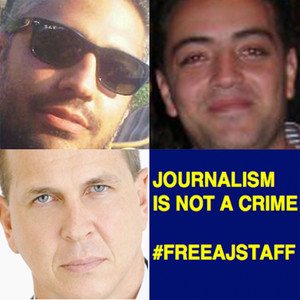 Outside the police station where he was finally released, Al-Shami thanked a jubilant crowd and called for the release of journalists who remain behind bars. “This is only the beginning. I am more determined to carry on this struggle than before,” he said.

Al-Shami was among 13 prisoners released from prison on medical grounds. He had resorted to a hunger strike for more than four months to protest against his prolonged detention. Sent to solitary confinement, many feared the worst as he lost 40 kilos and suffered from severe anaemia and the start of kidney failure.

In a statement, Al Jazeera said that this release was a “relief rather than a cause for celebration.” Three Al Jazeera English journalists – Peter Greste, Baher Mohamed and Mohamed Fahmy – still languish in jail. Detained since 29 December 2013 and accused of falsifying news and having ties with the banned Muslim Brotherhood, the prosecutor-general has demanded a maximum penalty of 15 to 25 years in jail.

The verdict of the three Al Jazeera journalists and seventeen others is due on Monday 23rd of June. Nine of them are in custody while the rest are being tried in absentia. “We are very confident we are going to be next,” said a hopeful Mohammed Fahmy, as he left a private hospital where he received a check-up for an injured shoulder, a condition which he says has deteriorated in jail.

After ousting President Mohammed Morsi in July 2013, Egypt’s military-backed government has waged a brutal crackdown against journalists and activists deemed to support the Muslim Brotherhood. Since taking office on 8 June, press freedom groups and journalists have been urging Egypt’s newly elected leader, former army chief Abdel-Fattah el-Sisi, to improve the dire climate for press freedom in the country.