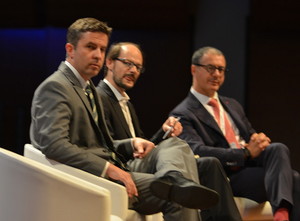 That’s pretty much a direct quote from Alceo Rapagna, chief digital officer of RCS Media Group in Italy. He goes on during his presentation at the World Newspaper Congress in Torino to back up that imperative with a mathematics game that is anything but fun for the traditional print publishers in the room — which is probably most of the audience. After sampling the audience’s views of their business prospects for print vs digital projects, he hits the summation button on his computer to show that average projections in Europe and United States are for a continuing annual 3 percent decline in traditional print revenues in contrast to 10 percent growth in digital income over coming years.

In Rapagna’s playbook, the response to that situation is to capitalise on what he calls the five disruptions that digital media are causing in traditional media business. Each of the five, he says, also suggests possible new business avenues.

So for instance, as newspapers lose some of their traditional physical touchpoints with readers, presumably due to dropped subscriptions and print sale interactions, Rapagna says there are openings to develop membership programs, massive distribution plays on special coverage, multimedia events and “digital-physical bridges” such as point-of-sale interactions tied to editorial content.

Besides physical touchpoints, the other disruptions Papagna notes are in B2C relationships around the publisher’s news, in the value and scale of available advertising data and innovations, in B2B relationships with advertisers and marketers, and in the whole realm of what audience data is collectable through all the expanding digital connections.

Jérôme Colin, principal at Roland Berger Strategy Consultants in France, takes up the data mantra during his portion of the session on “Alternative business models, unconventional and disruptive revenue streams” by connecting actual dollar value figures to the various types of personal information now being collected.

But Colin quickly adds that this is only “potential” value. The actual monetisation of data is a much more involved process even after the not-insignificant work of collecting it, he says, invoking the current new digital catch phrase: “Data is the ‘new oil.’”

Data of value to companies generally falls into the categories of identifying one’s social connections, one’s hobbies and interests, one’s location and travels, one’s purchases, and one’s credit card and bank info, Colin says. Different companies have different levels of access to different combinations of this information, with the mammoths such as Google, Facebook, Apple, Amazon, Groupon and various of the telecos being in the best position.

Publishers on the other hand rank far down from these leaders in data access, Colin almost unnecessarily points out. He adds, though, that publishers also need to understand that their very real monetisation opportunities in this area lie far from their print products. It now lies in data-based relationships developed through digital channels, and especially in the major growth area of mobile, he says.

“Media is in crossroads already,” Colin notes. “Print is going down because of pressure of the advertising change. Most of our potential is in mobile now.”

Chris Lee, president of Deseret Digital Media in the United States, is all over developing the mobile opportunities for his strictly digital component of the Utah-based Deseret media company. He already has the advantage of not being responsible for anything but digital media in the company, and tells the publisher audience to put their laser focus immediately on what he calls mobile-ready revenue.

Research is already showing the rushing audience transition from desktop to handset, Lee says. That argues for modifying digital strategies to emphasise those opportunities primed for mobile because, he warns, evenue tied to the desktop is therefore at risk, especially as display advertising. Yes, digital display is still growing, but he notes that mobile revenue is growing faster and, in his case, already accounts for 60 percent of digital intake.

All of these work just as well on mobile as on the desktop and so are not put at risk in the mobile transition.

The point being, Lee says, that “the winners are not necessarily the existing players. The mobile revolution is going to happen quickly and we have to be ready for it.”

If Lee has a secondary message for publishing working digital arenas such as Facebook, it is to emphasise engagement more than simply the number of click or likes.

Deseret’s successful FamilyShare.com enterprise, which focuses on family and parenting information, products and services, has far fewer likes on Facebook than, say, mega-brand Coca-Cola. But according to Lee, less than 1 percent of Coke’s Facebook followers actually engage with that company’s Facebook content, whereas more than 30 percent of FamilyShare.com’s followers do. As a result, FamilyShare.com is much more successful than Coca-Cola under Facebook’s algorithms at having its brand spread throughout the Facebook space and leading people back to FamilyShare content.