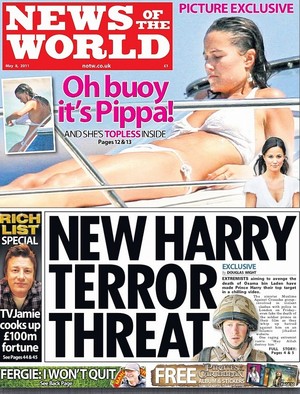 However, former News International executive and News of the World Editor Rebekah Brooks has been cleared of all four charges laid against her in the News of the World phone-hacking trial, along with her husband.

Brooks and Coulson were among seven defendants who were on trial. No other party has been found guilty, however the jury is still deliberating two additional charges against Coulson, and one faced by the News of the World‘s former Royal Editor.

British Prime Minister David Cameron issued the following statement in the immediate aftermath of the verdict:

I did so on the basis of undertakings I was given by him about phone hacking and those turned out not to be the case.

I always said that if they turned out to be wrong, I would make a full and frank apology and I did that today.

I am extremely sorry that I employed him. It was the wrong decision and I am very clear about that.”

“We said long ago, and repeat today, that wrongdoing occurred, and we apologised for it. We have been paying compensation to those affected and have cooperated with investigations.

We made changes in the way we do business to help ensure wrongdoing like this does not occur again. And we are strong supporters of the Independent Press Standards Organisation that is expected to begin work this autumn, serving as a watchdog on the industry in the public interest.

Out of respect for the fact that further legal proceedings will occur, we will have no further comment at this time.”