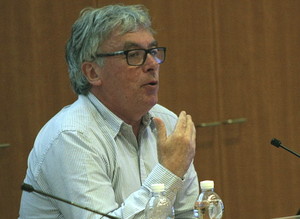 “Our brand extension means our audience is as broad as ever,” McNish said, highlighting the increase in revenue by combining print, digital, and mobile media.

“News brands, not just print, have a future in our business,” McNish said. Despite the rise in digital media, McNish acknowledged the importance of incorporating both print and digital media, particularly in terms of advertising.

“You see editorial working so closely with advertising,” McNish said. It is a positive thing to see the two entities working together, he said.

Referring back to 2006, McNish said that “Print in the U.K. marketplace was king.”

Today, there is a “40 percent decline in the number of regional newspapers being read in the U.K.,” McNish said. “The decline of regional print in the U.K. had to happen.” With the widespread transition to digital media taking place, McNish said, “The big publishers in the U.K. were not going to sustain papers that were unprofitable.”

NASA conducted a series of case studies over the past two months to observe the effectiveness of brand advertisements. They built on the success of their own Twitter, McNish said. It drove their online campaign and increased their revenue.

The second case study was Parklife, an organisation looking to promote an annual festival within the city. “[Parklife] needed to find a way to connect and lacked a voice to reach the target market,” McNish said. “We offered sponsored tweets through social media channel,” leading to its success.

The combination of media allows for a creative mindset, offering more options for advertisers and companies to expand their brands.

“The moral of the story,” said McNish, “is that digital and social media are buzzing – use them.”