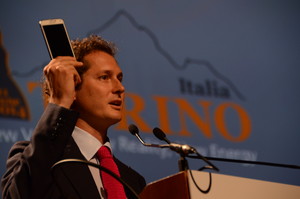 And all of those are driven by one “simple” fact: digital (disruptive) transformation. Speaker after speaker gave pleas, encouragement and warnings to their colleagues about the urgency of today’s publishing environment.

“If you don’t start every day by thinking about your digital journey, you are in deep trouble,” said George Nimeh, Chief Digital Officer for Kurier in Austria.

We have reported on RBS’ strategy to collaborate with a university and technology hub to achieve and maintain the level of innovation that they are aiming for. The company works with Eduardo Campos Pellanda, Director, Ubilabl/PUCRS, who spoke with Ribeiro.

Both said newspaper publishers must break from their traditional assembly-line-like approach to innovation and getting new products to the market.

“In a way it’s like a hackathon, because there are a lot of people in our company working together and coming up with new ideas to solve problems – every day,” said Ribeiro.

The Financial Times has built up a solid reputation for innovation. The FT now has more digital subscribers than print subscribers – and the highest number of paid subscribers in the paper’s 126 years, said Andrew Betts, Director of FT Labs.

“Entrenching an old model is never a good way to embrace change and to innovate,” Betts said.

She said the company’s business model is built on three core elements: quality content, monetising that content, and development and design. “That last element is so crucial today… The days of launching a product, letting it just sit there, and then moving on to another product are over. Everything needs to be tested, evaluated, developed and refined… constantly.”

“Technology alone is not the future; it’s the meaning, enhancement and perception of that technology that will define your success,” said Nicolas Henchoz, Director of EPFL + ECAL Lab in Switzerland.

Many newspapers are starting to involve or hire IT staff, developers, and designers, and to work with startups to play integral roles in all parts of the business, especially with digital content.

“Newspapers have to be at the same table with the developers,” said Soldal of Dagbladet in Norway.

Ernst-Jan Pfauth is Publisher of De Correspondent, the ground-breaking crowdfunding news site in the Netherlands. He said, “This is my most important advice to you: invite a designer and developer into your meetings and strategy discussions. They are just as much storytellers as journalists are.”

“The media industry will prosper when collaboration is as natural as competition,” said Benoît Sillard, CEO of CCM Benchmark Group in France.

Whether it be mobile, video, analytics, the upcoming onslaught of wearables, etc., it’s obvious that collaboration and partnerships are a key part of any publisher’s digital strategy, particularly when going up against goliaths and especially if you are a smaller
publisher.

The trouble with most newspaper publishers, said Nimeh of Kurier in Austria, is that in today’s rapidly changing publishing ecosystem, they are ill-equipped to “pivot” and change. “Although we often say that small and nimble is better, most of us are about as nimble as a big cargo ship.”

“Through our partnerships, we can spend less money by using revenue-sharing, for example, to test the waters,” he said. “Then we assess if it works, then if we invest more, consider bringing something in-house, continuing the partnership or getting out.”

And partnerships are all that matter when it comes to mobile, according to John Paton, CEO of Digital First Media in the USA.

“You have to focus on what you do best – and if you are not a mobile company, you are not the best. Without partnering, I don’t know how you can do mobile best. The demand for mobile is immense at the moment, but mobile app development talent is scarce. So partnering with an expert is the best route. And I don’t mean outsourcing, I mean true partnerships.”

So just how big is mobile these days?

“Seventy-five percent of Americans bring their phones to the bathroom,” said Caroline Little, President and CEO of Newspaper Association of America.

Jérôme Colin, principal at Roland Berger Strategy Consultants in France, took up the data mantra by connecting actual dollar figures to the various types of personal information now being collected.

But Colin quickly added that this is only “potential” value. The actual monetisation of data is a much more involved process even after the not-insignificant work of collecting it, he said, invoking the current new digital catch phrase: “Data is the ‘new oil.’”
In a Q&A session dedicated to data, a good question arose about costs of data collection, analyses, etc., particularly for smaller publishers. “The technology itself is not necessarily that expensive; in many cases it’s free, but the expertise to work with it is the challenge,” said Matt Lindsay of Mather Economics.