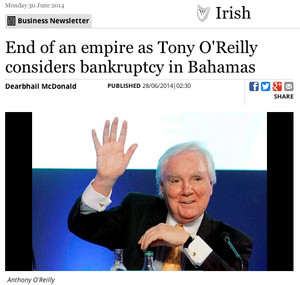 According to the report, O’Reilly previously had a ‘standstill’ agreement with his creditors (eight banks) over almost €200m that he owed. The agreement was allegedly brought down after the AIB bank claimed O’Reilly was insolvent.

The Commercial Court of Dublin last week ruled against O’Reilly’s bid for a six-month grace period from one of his major creditors AIB bank, potentially forcing him to declare bankruptcy. In his 30-page ruling, Judge Kelly declared that O’Reilly was not entitled to any further forbearance from the court.

The ruling means he has no time to sell his Castlemartin Estate in County Kildare, the proceeds from which he planned to use to “to try to discharge most or all of the debt owed to the state-owned lender” the Irish Independent reported.

After AIB’s break from the “standstill” agreement, others are reportedly set to follow, including ACC Bank, Bank of Ireland and Ulster Bank.

At the height of O’Reilly’s prominence as a billionaire media proprietor, his Independent News and Media owned a South African media group, the Independent group in London, and interests in Australia.