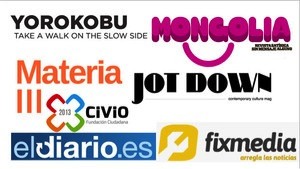 The difficult economic situation in Spain, combined with the expansion of the Internet, has resulted in an unprecedented structural crisis for print media. The 2013 Report of the Journalistic Profession, published by the Madrid Press Association, noted that from 2008 to 2013, 284 Spanish media outlets closed, and that the overall income of the industry (television, radio, newspapers and magazines) fell by 31 per cent between 2008 and 2012. Publications that disappeared included 182 magazines, 31 daily newspapers and 11 free publications.

However, the same study also shows contrasting and promising trends. In the last five years, more than 300 news initiatives were created by journalists. For the study’s director, Luis Palacio, “this isn’t all there is,” and there are probably “30 percent more projects” that haven’t been counted.

At the same time, other reports indicate that digital media companies are now kicking off. According to the General Media Study (EGM), in 2012 the number of people who claimed to have read online newspapers exceeded 12.5 million people, up 7 percent from the previous year.

This data suggests that journalism remains in demand. In a recent debate about the future of journalism in Spain, four prominent journalists pointed to this idea. For Ignacio Escolar, editor of eldiario.es, “never has so much been read as now” and “it is not journalism, but journalism business models that are in crisis.”

According to Iñaki Gabilondo, one of Spain’s most recognised radio journalists over the past decade, andnow editor of a video blog hosted on elpais.es, “in the avalanche of information that exists, our society understands that it needs references.”

How and why have new medias emerged?

The format and content of these new projects is diverse: from general online media (eldiario.es, infolibre.es), to those specialised in culture (JotDown.es) or science (Materia). They join a number of other print publications that have taken advantage of the printing costs, including satirical magazine Mongolia, the weekly publication Alternativas Económicas and the magazine Números Rojos.

The Report of the Journalistic Profession calculated that more than 11 000 journalists and media professionals lost their jobs between 2008 and 2013. One of the main reasons for this explosion of new media is arguably the need and desire to continue a profession that was described by Gabriel García Márquez as “the best job in the world.” As an added difficulty, according to the same study more than 5000 journalism and broadcasting students graduate from Spanish universities each year, with many resorting to self-employment. Pere Rusiñol, editor of Alternativas Económicas says that “journalists have no choice but to roll up their sleeves and create the tools to continue producing information even on a small scale.”

Reduced numbers in the newsrooms also confirms this idea. Of the 108 media employees surveyed in the Report of the Journalistic Profession 2013, nearly half had a staff of only three people.

How is it financed?

According to the report, almost 60 percent of new titles rely on advertising as the main source of funding. Some projects also sell applications and other products. However, for Soledad Gallego-Díaz, a veteran journalist at El País, this path poses a risk that “journalism, communications and marketing will be confused in a new business model.” Iñaki Gabilondo agrees with this view: “The key is that a media project is an intellectual and not a financial plan with an intellectual excuse.”

Many of the new publications are experimenting with innovative financial models to ensure greater respect for editorial independence from governmental and private advertisers. Some of the chosen models include the establishment of a worker cooperative to finance initial capital, as is the case of Alternativas Económicas, or finding partners and subscribers, as in the case of eldiario.es.

In other cases, outlets have opted for a combination of cooperative member contributions with micro-patronage or crowd funding. Despite the economic crisis, results have sometimes far exceeded the expectations of the creators. The promoters of Critic, a Catalan digital magazine focused on investigative journalism, combined a contribution of €1000 from 50 cooperative members with €25,000 from micro-donations through the Verkami platform. In just three days they surpassed the initial goal, and have now posed a second challenge to reach 1,000 subscribers before the first issue comes out, scheduled for September 2014.

The involvement of the reader; the key to quality

Promoters of new media frequently justify their projects as a way to provide independent information and reconnect with citizens.

Incentives to create new media are especially strong given a perceived lack of confidence in the future of traditional media. According to data from the Centre of Sociological Investigation (CIS) in 2013, journalists received a public approval rating of 59 out of 100. For David Corral, the president of the Publications Commission of the Madrid Press Association, this poor rating is due to the lack of independence and rigor of information, the poor image transmitted by programmes that are supposedly information and debate-based, and the perceived gap between journalism and societal problems.

According to Iñaki Gabilondo, in Spain, “the new journalistic reality includes a perspective that has been absent for a long time, and that responds to unmet needs and social groups that did not feel heard.”

For Soledad Gallego-Díaz, “new media are promoting a very combative, determined and independent journalism, but still don’t have the means to develop this aspect.”

“It is essential for journalism to find a formula that guarantees its future business as a democratic project,” reminds Gallego-Díaz, so that old and new media “can be robust, resilient and independent.” Otherwise they run the risk of what some experts consider the worst-case scenario: that mainstream media become very weak and that smaller media cannot grow sufficiently, resulting in an overall debilitation of the media landscape.

Is the key in the reader? Many new media titles are supported by financial contributions from their readers, a formula that a number of international mainstream media also rely on. For Pere Rusiñol, the key is that citizens “understand that if they want independent information they have to support it in some way.” Without this commitment to quality information, good journalism may lose out, as will the quality of democracy.